The Sinking of a Skewen Ship

One hundred years ago the SS Main sank after being fired on by German U boat UC75. The Main had found shelter from a storm in Luce Bay on the West coast of Scotland only to find the U boat had also sheltered there. The fate of the Main was sealed, she was not the only ship to be lost in the First World War but her connection to Skewen and to my family means that she has a special place in local history. 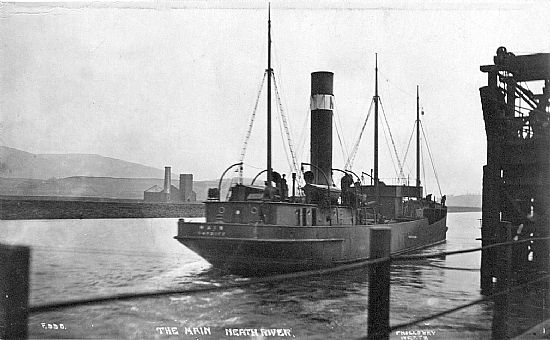 The S.S. Main belonged to The Main Colliery Company, one of the largest employers in the Skewen area during the early part of the 20th century. The ship was built in Glasgow in 1904 for use in the coal trade between Skewen, Ireland and Northern France. At the start of the First World War the Main was equipped with a gun on her quarterdeck and had two Royal Naval Reserve Gunners on board. Although she was registered in Cardiff she was a Skewen ship being loaded with coal from the Main collieries at Skewen Wharf. She had a crew of 13 at the time of her sinking. 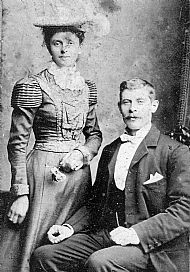 My great grandfather Thomas Soderstrom came to live in Skewen with his wife Annie and their four children and was 1st Mate on the Main. He met Annie Davies in Swansea, she was from Landore, they married in 1900 and after spending many years sailing the world as a merchant seaman he chose to do shorter voyages so he could be near his family. Their first Skewen home was River View, Cardonnel Road. From there it was said that the family could see the ship coming back up the river bringing father home to the family. Thomas was originally from the Aland Islands in the Baltic and was Swedish, he became a naturalised British subject in 1913.

Thomas and Annie on their Wedding Day

The Main was on her way back to Skewen from Belfast when she met with the U boat in Luce Bay on a stormy night in poor conditions. The captain had gone to his cabin and was awoken at 2.30 am on the 9th October 1917 when he heard shelling as if from a machine gun. He rushed up on deck and could see the submarine on the port side about 200 metres away. It became clear that the ship was sinking and the life boats were launched. The crew were able to get into one of the life boats but in the confusion it was not possible to ascertain if all hands were safe or not. Over the next hours the boat was washed over by the high seas and capsized on several occasions, each time one or more members of the crew were lost until only three were left. Eventually only the Captain, Robert McCorquodale was left alive. He survived 15 hours in the water and was eventually washed up on the Eastern shore of Luce Bay at Port William where he was found by some young boys. 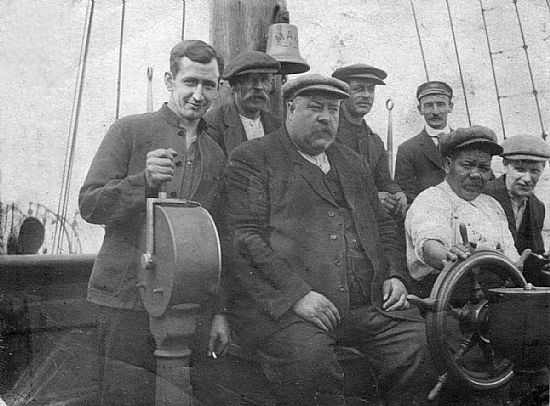 The crew of the SS Main with Captain Robert McCorquodale central

The sinking had a devastating effect on Captain Mc Corquodale and in a letter to the secretary of the Main Company he wrote of his grief at 'the loss of all my crew and the good old ship Main.'

My great grandmother was left with her four young children to care for. She was presented with the original model made by the shipbuilders and the model was at her home at St. Johns Terrace for many years before she presented it to Coedffranc Parish Council in the 1950s and it can still be seen on display at the Carnegie Community Hall.

One of the strangest aspects of this story is that if you wanted to see the wreck of the Main, which sank off the coast of Scotland, you would have to dive off the coast of Norfolk close to the town of Cromer. The Main was salvaged in 1919 and brought to the small village of Drummore where people were allowed to view the ship for a small fee. This certainly is not something that would be considered to be appropriate today however the money collected was used to fund a memorial to the ship and her crew that is in the local cemetery. The salvaged ship was re named Marden and the ship worked until 1929 when it sank after being in a collision off the Norfolk coast. On this occasion there was again a crew of thirteen. They all survived.

The Main Colliery Company replaced the Main with a new ship, the Goodwill of Bristol and Robert McCorquodale was the first Captain. He died on board on the anniversary of the sinking of the Main a few years later.

After some years in decline The Main Colliery Company closed in 1928. Their collieries in the Skewen and surrounding areas had closed and it was the end of an era. Coal mining in the region was in decline and Skewen Wharf as we see it in many photographs of the period was no longer necessary.

My grandfather told me this story when I was very young. About Thomas Soderstrom the merchant seaman who came to Swansea on a sailing ship, who met Annie and settled here. He told me about the trip he took to France on the Main with his father and how he queued up with the rest of the crew to receive his ‘pay’ from Captain McCorquodale. When he went back to school he was the only person in the school, including the staff, who had ever been out of the country. The family became well known in Skewen and maybe their surname will be remembered by some.

The lives of all thirteen of the crew, men from England, Scotland, Latvia, Ireland, Norway, West Indies and India are remembered by us as those who died doing their job at a time of great risk and did not return. We remember them and the great loss suffered by all who knew and loved them. 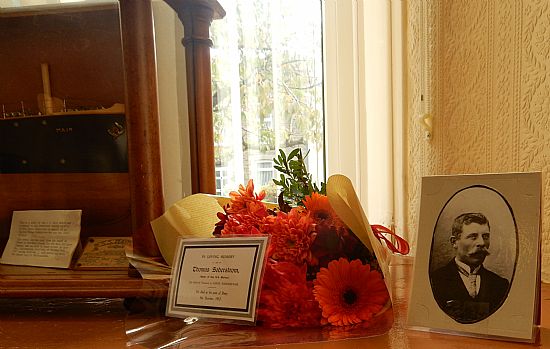 Floral tribute to Thomas Soderstrom and the crew of the SS Main placed near the model at Carnegie Community Hall, Skewen to mark the centenary of the sinking.