The Man Who Caused the Rebecca Riots

‘And they blessed Rebekah and said unto her, Thou art our sister, be thou the mother of thousands of millions, and let thy seed possess the gate of those which hate them’…Genesis 24.60

It is not very often that history jumps up and bites you on the toe but that is exactly what happened to the graveyard clearance team working at St. Catwg’s Church, Cadoxton in July 2012.  The church warden, Mrs Annette Williams, was very much a part of the team and, whilst working there, she was also reading a book about the Rebecca Riots.  In it she spotted the name Thomas Bullin and remembered seeing a grave with that name in the churchyard.  This name was totally unknown to local Neath historians, but research placed this notorious character firmly in the pages of Welsh history.

Thomas Bullin was born in 1805 in Esher, Surrey.  Through his business interests he made a considerable fortune but he was said to be ‘a trifle illiterate’ in his letters.  He did his best to stay within the law and always maintained good credit.  However, his strategy, aimed to satisfy the beleaguered Turnpike Trustees and to maximise his own profits, was always going to irritate the people actually using the roads.

He arrived in South Wales about 1828, by which time he was already leasing the tolls at Turnpike Trusts in many parts of the country – London, Portsmouth, Bristol etc…  Thomas Bullin’s occupation is described as toll farmer as opposed to the toll keepers or collectors who actually manned the toll gates and bars. In South Wales he took over many of the tolls in Breconshire, Monmouthshire, Glamorgan, Carmarthenshire and Cardiganshire.  In some of these places he put his own family in charge so that, for example, in Neath he had a brother at one gate and his father at the West Gate.  His brother Charles was at the Aberystwyth South gate in 1841, Llanarthney 1851 and Swansea Upper (Strand) in 1861.  Another relative, possibly his brother John or another relation James, was in charge of the Cowbridge gate in January 1835 when the keeper shot a boy dead.  The coroner ruled the death an accident but was not very sympathetic to Bullin, commenting that ‘the state of Bullin’s mind since the accident is truly deplorable.’ Maybe the gatekeeper gave up the problematic tolls after this and he is the same James Bullin who is recorded in parish registers as working in later years in industry at Neath Abbey.

The Turnpike Trusts were set up to improve the roads of the country, being an improvement on the parish system that previously operated.  In Glamorgan for example there were five Trusts.  Each Trust leased out its gates to individuals and toll-farmers rented large numbers of gates.  Williams comments, ‘Their appearance [toll farmers] must have been a god-send to the harassed trusts, for they usually took over all the gates of a trust en bloc and at a remarkable increase in rent.’ [1]

He recouped his investment by putting up more bars and more gates (without necessarily having the agreement of the Trustees) and increasing the rents.  Having total control of the gates in a district, Bullin could virtually do as he liked.  He also refused credit.  Four extra gates were put up in Whitland, including Efail Wen.  In Llanarthney Parish (where the Bullin brothers were all concentrated at the time of the 1851 census) there were three gates and eleven bars! 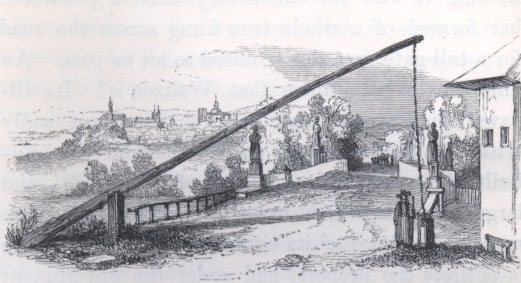 There is no evidence that he ever acted illegally and, if taken to court, his attitude was, “Well, if the courts find me in the wrong then I will repay”.  If told that a bar was not legal then that would be removed, but sometimes the Trustees were not aware for years that a bar had been put up and in the meantime, Bullin would have made his money. An example of his style of management was revealed in August 1843 when Bullin was summoned before the Swansea Magistrates.  The Trustees had authorised him to charge 1½d for every cart of coal, but for more than a year Bullin had charged 3d.  Bullin in his defence quoted an Act of Parliament which allowed the higher amount but the magistrates pointed out that the sum quoted in the Act was subject to any reduction imposed by the Trustees.  Bullin paid the £5 penalty and revised his charges accordingly.[2]

His toll-collectors or gate-keepers were paid on commission so very often they interpreted the fees in their own way.  At Aberavon East for example, where Thomas Bullin (senior), father of the toll-farmer, was the collector it was alleged that a cart carrying bags of potatoes for a number of people would be charged for each bag belonging to each person, rather than one charge for the whole cart. Thomas Bullin junior categorically denied to the Commission that this was happening.

His problems came to a head in West Wales where farms were poor and incomes low.  The result that we all know about was the Rebecca Riots.  Bullin was denigrated by one and all but there is a view that he was made a scapegoat and perhaps others, the Trust owners for example, may have been more to blame.  The ‘rogues’ in the Rebecca saga, Thomas Bullin and George Rice Trevor, the Deputy Lieutenant of the County, had their own opinions as to cause and blamed Thomas Campbell Foster, correspondent of The Times newspaper, for helping to ferment discord in Wales by his reports.

Events boiled over at Efailwen in 1839 when Rebecca and ‘her daughters’ pulled down the toll-house which was held by Bullin’s brother, Benjamin – known as Little Bull.  Three years later when he put up another gate near St. Clears that too was pulled down.  Bullin was certainly targeted by ‘Rebecca’ and was generally blamed for much of the unrest.  Letters were sent to him from Rebecca and on one occasion two woodcuts were sent to him, one of them depicting a man without a head and accompanied by a written note, ‘Receipt for the interest I took in the matter’. 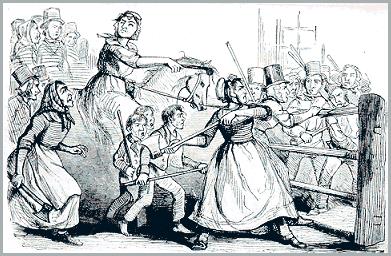 After the Inquiry into the unrest Bullin gave up toll-farming and set up a Livery Stable in Swansea and that is where he lived and died but both he and his father lie buried at St. Catwg’s Churchyard, Cadoxton.  Bullin was the pioneer of public cabs in Swansea, having been granted permission in 1858 to have a cab standing for hire in Castle Square.  A later Western Mail report commented, ‘In all weathers, there stood the solitary vehicle and its jolly-nosed custodian, when not out on hire.  It had a narrow escape once, I remember.  An obstructive member of the Town Council wrote an article entitled ‘A Man About Town’ in the Swansea Weekly Mail in which he drew the attention of his colleagues to the fact that the solitary horse had worn a hole in the square, at the spot on which he stood,

‘big enough [as the exaggerating obstructive  put it] to bury himself in’ ….. 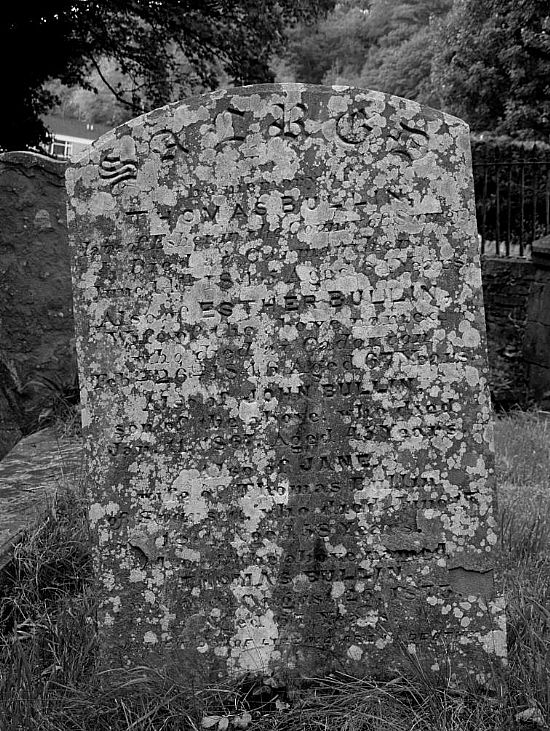 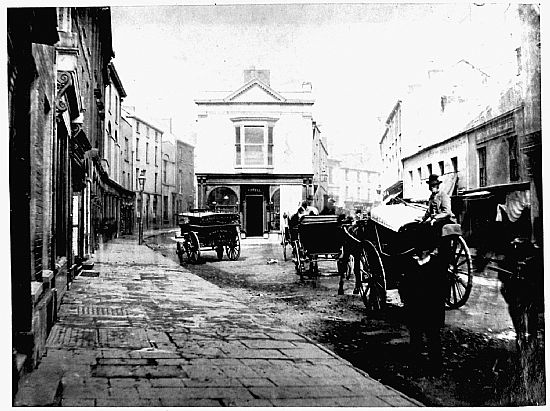 The delivery vehicle on the right belongs to the Bullins of Heathfield Mews.

The question may well be asked why Rebecca and ‘her daughters’ did not appear in Glamorgan.  Bullin certainly had extensive interests in the County and his methods would hardly differ from those he imposed elsewhere.  In fact, tollgates were attacked but not by ‘Rebecca’ and not with the sustained ferocity of attacks in West Wales.  The Aberavon Eastern Gate (sited at Bethany Square) for instance was smashed and the toll-keeper and his wife molested in November 1843.

Although he controlled all the gates in Bridgend (including Aberavon East at Taibach) from 1837 to 1843, the Bridgend Trust seems to have exerted greater control than their counterparts in West Wales.  In Neath he had several but not all the gates and so could not manipulate the fees in the same way.  Additionally, there may have been poverty in Glamorgan but it was nowhere near as dire as in rural West Wales.

A price list for the Neath Gates of 1823 reads:

The West Gate lay on the junction of Swansea and Cadoxton roads with a gate across each.  Tolls were charged for entrance to Neath and traffic passing through from Merthyr to Swansea.  The Gate was taken down 2nd April 1889.

The East Gate was at one time in Pendre.  This became disused about 1845 and Zoar Penydre Schoolroom was built on the site forty years later.  It is believed that a gate house was built on the Tonna road, above Llantwit to capture the traffic now travelling along Gnoll Park Road which was built around 1850.

The South Gate originally stood at the Mera, opposite the western end of Gnoll Avenue. The construction of London Road c1830 led to the Gate being moved to the bottom of Cimla Road where it had two gates.  This was taken down when the Drill Hall was built.  Later still, the South Gate was moved to Briton Ferry Road where later stood Southgate Stores – it projected in front of the adjoining houses leaving a wider than usual pavement area.

The Rebecca Riots.  A Study in Agrarian Disorder - David Williams (1955)

The Report of the Commissioners of Inquiry for South Wales (1844)

Western Mail and The Cambrian newspapers.

[1] Much as a bailiff collects debts on behalf of others.

[2] But in the meantime had obviously made a tidy sum.