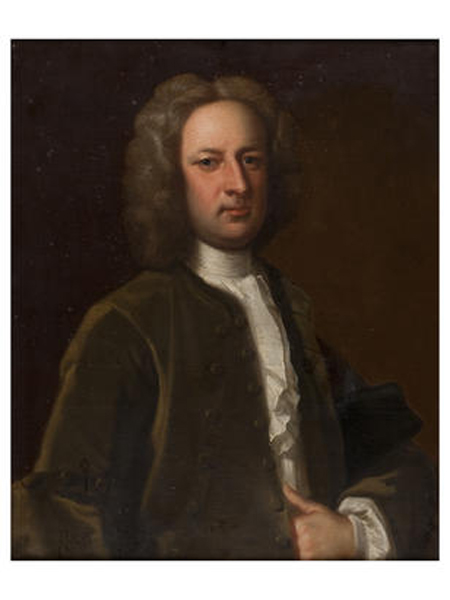 A few years ago the above portrait appeared for sale in an auction.  The picture was of Morgan Jenkins (1698-1738) of Neath Abbey but the question posed for local historians Is, ‘Who was he?’

If you look in Neath local history books you will search in vain for anything about this evidently well-off gentleman and even searching elsewhere there is very little information to be found.

Morgan was the son of Newce Jenkins (1674-1704) and Margaret Lewis and was said to have been born in Neath Abbey.  Newce obtained his unusual first name from his mother who was from Much Hadham in Hertfordshire where the family had a court of arms.  Newce became a captain in the army and was killed at the Battle of Blenheim.

Recorded in the House of Commons papers is a “Bill for the Sale of the Estate of Newce Jenkins, and Margaret his Wife, and Mary Beningsfeild, Widow for Payment of Debts”.  This is dated January 1696 and may reflect the difficulties this family were in at that time and give reason for their move to Neath Abbey.  There is certainly a lot of Activity in the Chancery Court in the mid-17th century relating to the Newce family and it may well be that this was an inherited debt from his father.

Nevertheless, the family certainly had good connections.  Edward, the son of Morgan Jenkins, married a daughter of Evan Jones who had estates at Ynysarwed in the Neath Valley and Llanfrechfa in Monmouthshire.  Evan Jones had married into the Kemeys family and many of his Jenkins descendants bore ‘Kemeys’ as a middle name.

The marriage of Morgan Jenkins took place at St. Thomas’ Church in 1716 and later generations were baptised there.

Apart from the obscurity of this gentry family, another query is: where in Neath Abbey would they have lived?  They would obviously have a substantial dwelling but the only two large houses indicated on the Hearth Tax in the Dyffryn Clydach district are the mansion inside the abbey (17 hearths) and Dyffryn (5 hearths).  The latter was occupied by the Williams family and the mansion was home to the Hoby family until 1699 though it is possible that more than one family lived there.

The family stayed in Neath Abbey for several generations but in the late 19th century moved to Exemouth where descendants bore the surname ‘Kemeys-Jenkins’.