As part of his series of programmes for Radio 4 entitled ‘Travels with Bob’ the Society was visited by  Paddy O'Connell and his border terrier.

The purpose of his programme is to visit various towns (accompanied by Bob his dog) in search of local pride and the bonds people make with the places they live.

In this regard our visitors were interested to hear about Harry Parr Davies, a Briton Ferry man who became famous as the accompanist to Gracie Fields.  He wrote many songs for her including the music for her most famous hit ‘Wish Me Luck as you Wave me Goodbye’.  He also wrote both songs and plays for other stars of the 1930s and 1940s.

One of his plays ‘The Lisbon Story’ was made into a film in 1946. It was performed for the first time in Wales by the Neath Amateur Operatic Society in 1950, who also hosted a celebration dinner for the author at the Castle Hotel.

Three members of the Society were present at the Neath Mechanics’ Institute to answer questions put by Paddy (Bob listened intently!).

The time of airing the recording is not finalised but will be one of the five episodes to be broadcast on Radio 4 from the 26th to the 30th of December. 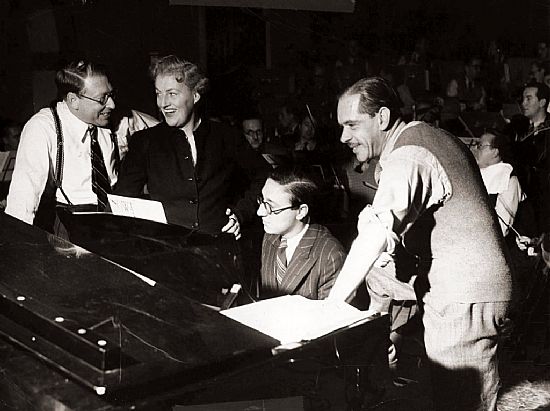