28 August 2016
Before Cycle Helmets and Lycra

How many of you have sat down at your computer to look for something specific and before you know it you have been side-tracked and hours have passed.  Looking at archives can be similar especially if you are in a folder of random things.  It was during one of these exercises recently that a ‘little gem’ came to light in the shape of a membership card For the Neath United Cycling Club dated 1891.  Inside the card, a news cutting from the Western Mail tells us much about the owner and his fellow cyclists. The photograph referred was also published in ‘Neath & District in Pictures’ - Vol.1 (1980) 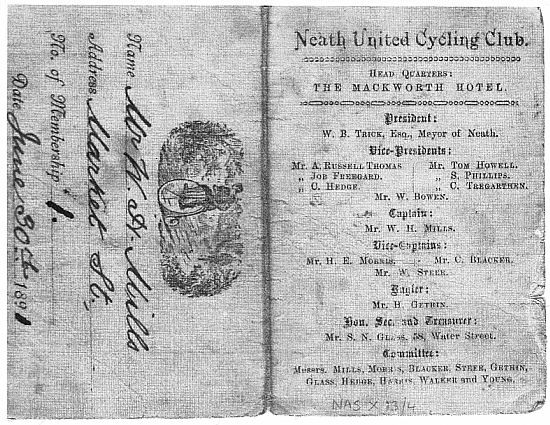 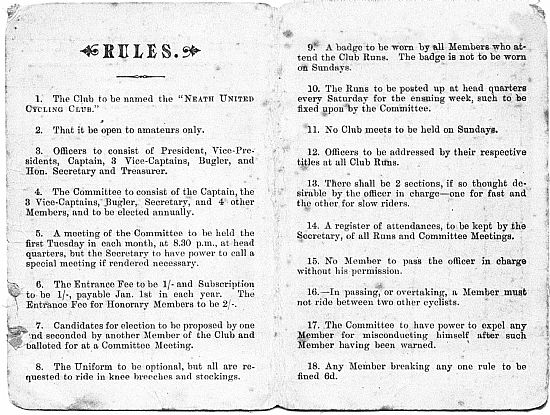 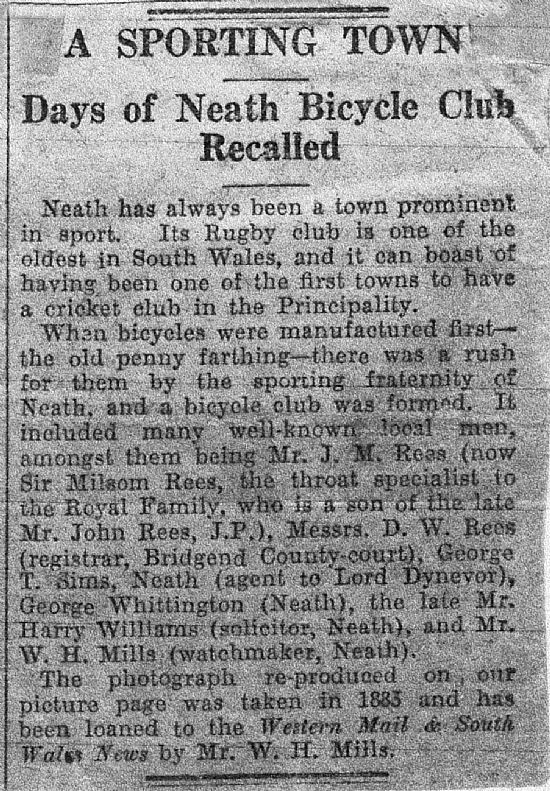 The Mackworth Hotel was in Green Street along from the market.

As well as to warn others of their approach, in the early days of cycling, high wheeler clubs would ride with at least one bugler, who would pass on instructions from the club captain, aurally.  Here is a typical set of bugle calls from The American Bicycler handbook of 1879:

Reveille - to be sounded first thing in the morning when the club is on a tour.

Mess - to be sounded to summon to any meal.

Assembly - to be sounded to order to call club together, to fall in preparatory to mounting.

Gallop - to increase the pace.

Ride at Ease - at sound of which each rider may choose his own companion.

Retreat  - may be sounded if the captain so orders, to announce that the day’s run is completed.

Tattoo - may be sounded if the captain so orders, as a suggestion to the club that it would be advisable to go to bed, and get ready for the exertions of the morrow.

Cyclists didn’t use standard military bugles they had special ones made, triple coiled in order to make them especially compact, and thereby portable. Club buglers would carry these often highly decorated bugles on their hips, ready for action.

Inevitably, adapted with a rubber squeeze bulb, the bugle or bicycle horn became the warning device on early motor cars.

Even today many modern automobiles have an embossed bugle on the steering wheel to signify the horn.  This stylised bugle is very possibly a throwback to the earlier bicycle bugle. 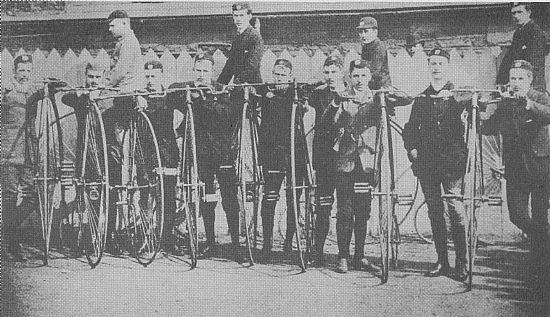 The above article is an example of what can be achieved by researching one very small item.  All of our visitors are encouraged to visit our archive and maybe produce something similar.  Such items would be welcomed for submission to this website.