A special exhibition to commemorate the First World War was staged in the community building at Neath's Victoria Gardens from the 7th -14th November.  Centrepiece of the event was a willow sculpture representing one of the dogs that were used in the conflict (an aspect of the war that has had little publicity until now).  At the end of the exhibition, this will join the willow War Horse in the small garden space outside the venue.

Central to the display were photographs depicting events and the streets around Neath at the time of the conflict.  The majority of these images were provided from the archival collection of the Neath Antiquarian Society. 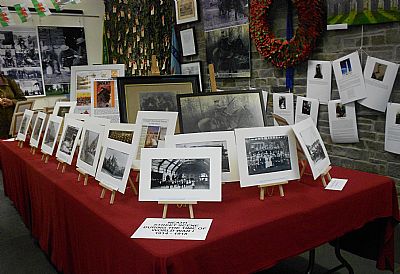