a report from our Secretary 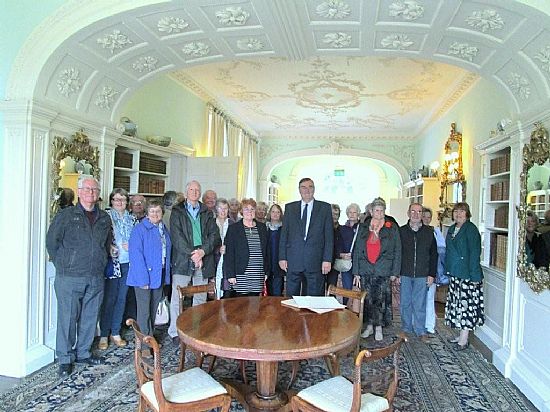 The Society's Annual Excursion took place on Saturday 10th October 2015 with a visit to the Physic Garden at Cowbridge followed by afternoon tea at Fonmon Castle.  In cool autumn sunshine Gillian Griffiths (sister of our Martyn), a volunteer at the garden, led us around explaining the history of the site and the history and use of the plants.  Each bed is planted with herbs beneficial to particular parts of the body e.g. fevers, bones, childbirth, respiratory ailments etc.  Gillian's talk was both informative and humorous.  At the end of the visit we were able to purchase plants from a selection on sale.

After a light lunch in Cowbridge we travelled to Fonmon Castle, where we were met by the owner, Sir Brooke Boothby Bart.  The origins of the castle go back to the twelfth century and the Norman lords.  The castle has been owned by only two families in all that time....and those were connected by marriage.  It now appears to be more of a manor house with some of the rooms, although not large, exquisitely decorated with fine plasterwork and ceiling mouldings.

After afternoon tea, beautifully presented in the attractive library, some of the group strolled through the walled gardens before returning to the coach for our journey back to Neath.

Even though 40 people originally expressed an interest the number of members joining the excursion was disappointingly small at just 25.  Much work goes into organising an annual excursion, with costings being carefully worked out.  Much thought will be needed before embarking on arrangements for next year.  Suggestions from the general membership would be appreciated.