This is the story of a family that today we would say lived under the radar.  No family announcements and no news articles relating to family members are to be found in local newspapers.  But one family member is acknowledged for a good deed with a brief account in the parish magazine and by a simple plaque erected inside the Church.  The parish magazine informs us that 'Martha James was all her life a parishioner and one of the oldest Communicants in Cadoxton Church.  She was one of the most kind hearted persons and ready to help her neighbours in all troubles.  She was very quiet, unassuming and devoted to her Church.  Her interests were entirely local and her two deceased daughters were members of the Cadoxton Branch of the Girls Friendly Society.'

In Memory of MARTHA JAMES wife of Evan James, Collier of Penywern Road in this Parish who died Feb 3rd 1917 aged 73 Years.  She Bequeathed the First Gift £100 towards the Re-Endowment of this Benefice after the Passing of the Welsh Church Act 1914.  “Will a Man Rob God! Yet Ye Have Robbed Me But Ye Say Wherein Have We Robbed Thee?  In Tithes and Offerings”.  God Loveth a Cheerful Giver.

Disestablishment meant the end of the church's special legal status, and Welsh bishops were no longer entitled to sit in the House of Lords as Lords Spiritual.  As the Church in Wales became independent of the state; tithes were no longer available, leaving it without a major source of income to maintain all its churches, properties and glebes.1

Disendowment, which was even more controversial than disestablishment, meant that the endowments of the Church in Wales were partially confiscated and redistributed to the University of Wales and local authorities. Endowments before 1662 were to be confiscated while those of a later date were to remain. This was justified by the theory that the pre-1662 endowments had been granted to the national church of the whole population and hence belonged to the people as a whole rather than to the Church in Wales.  Understandably, this reasoning was hotly contested, but to no avail.

Martha Lewis, as she was known before she married Evan James, was born in Cimla in 1843, one of eight children born to William Lewis and his wife Margaret James; five of Martha’s siblings had been born in Pembrokeshire before the Lewis family moved to 'Crunallt' in Cimla.  Martha’s father initially worked as a labourer before the family moved to Mount Pleasant, Cimla where he found employment as a gardener.  By 1861 and still employed as a gardener, William and his wife Margaret had moved to Cadoxton Village and living with them were their son John and daughter Mary.  At this time, along with two other young ladies from the Neath area, Martha was employed as a domestic servant in the Cardiff suburb of Roath.  A burial record in 1864 of one William Lewis of Glyncorrwg, may refer to Martha’s father as her brother Levi was living in Glyncorrwg and Martha’s mother was recorded as being a widow at the time of the 1871 census.  Whether Martha returned to Neath before or after her father’s death is not known.

Martha married Evan James in 1867.  The couple lived at Cwmbach with their daughters Margaret and Elizabeth but moved to Traws Dir (a location somewhere between Cadoxton and Neath) where Evan may have found employment in the mine at this location.  Martha’s daughters died in the April and May of 1889 and were buried in St Catwg's Church; (newspapers of this period were reporting an outbreak of Scarlet Fever in the Neath and Swansea localities).

By 1901 Martha and her husband had moved to Penywern Road and the census return records Evan as being a Colliery Fireman, a role which usually carried some responsibility with extra pay and a guaranteed week’s work.  The couple remained in Penywern where Evan died in 1915 aged 70; Evan’s effects were valued at £737.8s with Martha the sole executrix of his Will.  Just over a year later Martha died and following her funeral the Vicar for Cadoxton-Juxta-Neath was asked to attend the reading of Martha’s Will.

Martha appointed William Bowen, a provisions merchant in Queen Street, Neath as the sole executor of her Will.  Among the beneficiaries of her Will was the Vicar of the parish of Cadoxton-Juxta-Neath who was to receive £100 'to be applied by him in such a manner as he may think best for the purpose of Church Work in the Parish'.  The parish magazine published after Martha’s death informs us that the legacy was so very unexpected but very welcome as the anticipated reduction in endowments would leave the Church with an annual income of just £8.  The writer of the article also informs us that Mrs James had intended that a gift of £50 was to be made to the Cadoxton Branch of the Girls Friendly Society.  However, we are told the Parent Society in London intended to claim the sum.

Martha’s effects were valued at £938.18s.4d, which was a substantial sum for the majority of households in 1917.

1 Hence the quote at the end of the memorial from Malachi 3:8 King James Version (KJV). 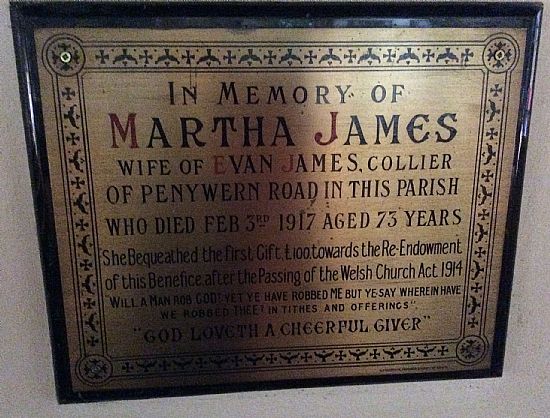