The town of Neath developed around the castle and the church.  Bridge Street was the road in and Water Street the road out.  For centuries the main streets forming the town were High Street (now Old Market Street), Cattle Street, Wind Street and (from c1600) New Street.

In the early eighteenth century things started to change.  The Mackworths had arrived!  Their entrepreneurial schemes meant an influx of workers and the town expanded, initially along Water Street towards the Mera and along the Latt towards Llantwit.  The Mackworths brought with them many new industries which were mainly based in the Melincrythan area.  They also expanded the coal workings.  Coal was known to have been worked in the Neath area from at least the thirteenth century but not on the same scale.  The Abbey had developed pits and the Evans family of the Gnoll had held a monopoly of the trade near the town.  Now, under the Mackworths, new pits were opened. 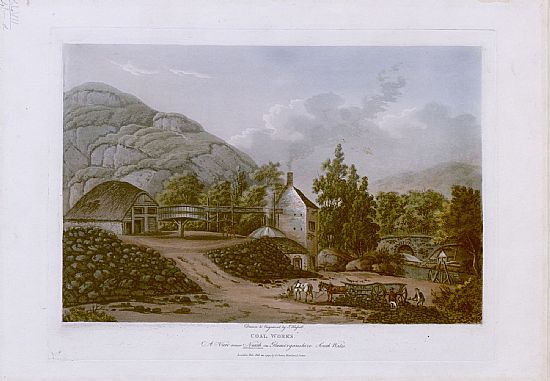 Henry Penruddock Wyndham, a topographer from Salisbury, visited Neath on his second tour of Wales in 1777.  He was delighted with the industry he could see on either side of the River Neath and extending inland.  He espied copper works, tin works, iron works and coal pits and was very impressed.  However, his excitement was nullified by the appearance of Neath town.  He said that, unlike other new industrial towns that he had seen, such as Manchester and Liverpool, Neath had not built broad streets and grand buildings.  Instead, he commented that the housing for the most part consisted of 'miserable hovels' which compared unfavourably with those in the poorest English village.

Neath constricted by the river, church, castle and valley sides was never going to be a Manchester or a Liverpool, although the Mackworths no doubt played their part by supplying their workers with cheap housing and not investing in the structure of the town.

The river by 1781 when 'CG' visited the area was spanned by a single arch bridge described by him as 'perhaps one of the first pieces of architecture in the Kingdom.'  Another anonymous author, 'CC' just eight years later said that 'The bridge over Neath River has one half of its length built of wood, and the other half of stone….. It is in an infirm state and will probably soon be replaced by a new one.'

'CC' commented that the streets of Neath were well paved, but narrow. Fourteen years later when the Reverend John Evans of Bristol arrived (1803) the town was still described as having 'narrow and dirty streets with houses blackened by smoke.'  In fact, he went further and said that, 'a more uncomfortable or disgusting place, perhaps, can not be imagined.'  The Reverend Richard Warner of Bath (1798) spoke of houses which were 'ill-built and incommodious' and John Thomas Barber, a miniature portrait artist, arriving also in 1803 commented on the 'soil blackened with coal-works and rail-ways' (sic. tramways).

The Reverend Sir Thomas Gery Cullum’s remark (1811) about Neath about sums up the opinion of tourists.  He talked about the dismal smoking town of Neath and adds, 'I could have shut my eyes with pleasure when passing thro’ this Headquarters of Vulcan.'

The smoke from the manufactories was a huge problem.  It descended on the town and its environs for two-thirds of the year and must have had much the same effect as the London smog of the last century.  The smoke didn’t just stay for a few years – it must have been present for the best part of a century.  Margaret Martineau on her tour of Wales in 1824 wrote that at Neath comes 'the end of the beauties.  A thick smoke closed the scene and we drew in copper at every breath.'  Writing in 1861, Samuel Carter Hall, a London journalist and author, said that, 'Neath is now a town of smoke through which its rare and valuable antiquaries are all to often but barely seen.' 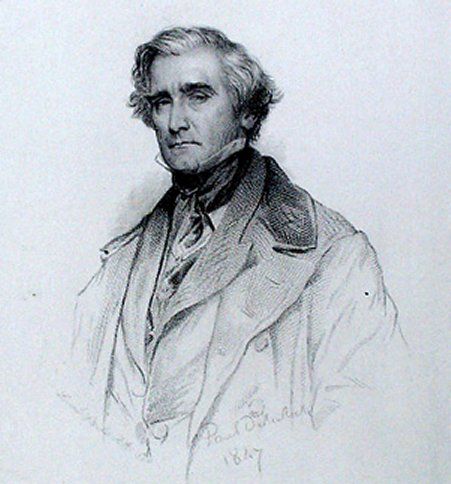 Accommodation in the town varied.  The Mackworth Arms seems to have been the most popular although in 1801 a botanist, Thomas Martyn, said that 'the ceilings are low and most of the furniture old and dirty.'  On the other hand, Michael Faraday (1819) had no complaints and said that 'our Host … was very attentive.' Thomas Mytton and his sons, Henry and Thomas, stayed at the Ship and Castle in 1776 and stated that there was a very elegant assembly room.  Twenty years later, the Reverend Warner (1798) stayed commented that he was, 'attracted by the good-humoured face of the little fat landlord, Mr. Roteley.'  However, the ups and downs of these hostelries may be noted in the comments of two anonymous women from Norfolk (probably Mrs. Judith Beecroft and her daughter Laura) who were not impressed in 1827 when they wrote that the Ship and Castle 'did not promise much but it was the best inn.'  They also added that it was 'humble, dirty and dear.'

The wealth of Neath was due, not only to its industries but also to its position as a river port.  Colonel John Byng [a nephew of Admiral Byng] arrived in August 1787 and was taken on a tour of the shipbuilding yards, rope walks, iron forges and to Sir Herbert Mackworth’s shops and water engines.  Coal was king even in the eighteenth century and nearly every other industry depended on its availability.  The botanist Edward Donavon (1805) remarked that the works had received a temporary check due to the war but were now reviving.  He said that coal, apart from being exported and used in the works, was also sold locally in 'strikes' which he said was a measure peculiar to the area.  He also advocated stone coal which was sold in great quantities.  Stone coal burnt slow with little smoke and was used successfully for drying malt.

The castle at Neath was described by one topographer as 'the remains of the remains of a castle.'  Warner visited and remarked that 'one narrow piece of wall, which rises to a great height, and being unsupported by other parts of the building, threatens to crush the surrounding cottages on the first hurricane that shall happen.'   Henry Wigstead who came a year earlier than Warner noted that the castle was 'in a very ruinous state and at present appropriated to confine hogs and fatten in.'

A Tour through Monmouthshire and Wales 1777 - Henry Penruddock Wyndham