Whilst working the Gnoll Estate collieries at Kymle an interesting fossil was found among the coal measures on 17th January 1851.  At the time it was believed to be that of a gigantic serpent that must have slithered over the surface of the primeval swamp at the dawn of time.

Such was the excitement created by this find that it was placed on public display at the Neath Town Hall.  The three day exhibition heralded it as 'One of the Wonders of Nature' and it was endorsed by 'Gentlemen of great Geological Acquirements' who agreed that from the perfect scales and twist of the body that the specimen measuring eight feet and three inches long by seven inches wide must be without question a FOSSIL SERPENT!

Interestingly the prices charged for admission to this spectacle are a snapshot of how the different levels of society were regarded and was doubtless contrived to encourage the maximum number of visitors from the educated elite to the plain curious by levying prices to suit all pockets. At the top end Ladies and Gentlemen [upper class] were charged one shilling; Tradesmen [middle class] had to pay six pence, whilst the remaining [lower class] Working Class had to part with, no doubt, a hard earned three pence.

The poster produced to advertise the event is a further reflection of the craft of the printer and compositor, being a perfect example of the effective use of typefaces of varying size and style for maximum impact in conveying information. 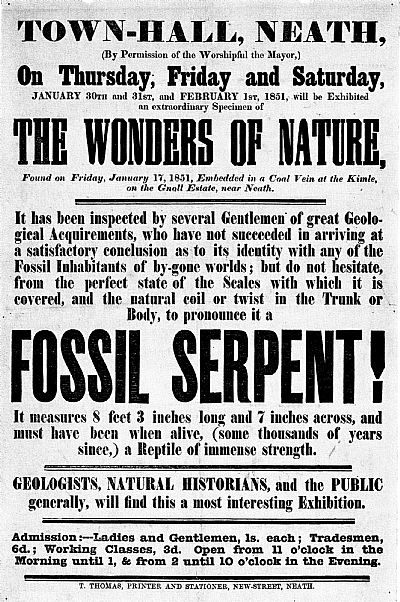 Quite what happened to the specimen after the exhibition closed has never been established. What is known is that the serpent myth would be short lived and shattered by the truth of the matter when it was declared that the 'serpent' was, in fact, a fossilised tree called a Lepidodendron   and were commonly found in the coal measures of south Wales.[1]

Was this just the case of a few wide boys seizing the opportunity to put on a 'sideshow' and generally conning the public?

What is surprising is that evidence of fossilised trees is recorded two years earlier in 1849 by Frederick Moses, a Neath mining engineer, in his Treatise of the coalfield of South Wales.

The most perfect specimen of a fossil tree the author has ever seen, was discovered by his father, the late Mr. Moses Moses, mining and civil engineer. It was met with in the under plane of a bed of shale, reposing on a seam of coal. Though great precaution was observed in its removal, it nevertheless received considerable injury, but it was afterwards refitted and a drawing made of it. There appeared a difficulty in identifying its species, but it seemed to have a stronger resemblance to a young poplar than any other known tree or plant, fossilized or otherwise. The lepidodendron is met with in great abundance in some localities, but we never saw them in such profusion as in an open cutting on the South Wales Railway, near the town of Neath, one of which (the lepidodendron Sternbergii) when measured with a tape line, was found to reach the enormous length of one hundred feet. This is, we believe, the largest that has ever been discovered in this country, or probably in any other and those who may wish to see this gigantic specimen, may be gratified with a view of about thirty feet of it, imbedded in a rock on the north side of a railway cutting to the back of Court Herbert, at a distance of about one hundred yards from the entrance and within one mile of the town of Neath. The interior of this fossil is a hard compact sandstone, somewhat finer in its granulation than the rock in which it is imbedded and the bark or cuticle slightly tinged with a dark glistening bituminous matter. The calamites and sigillaria are also very prevalent, some of which have come under our notice in a state of good preservation. 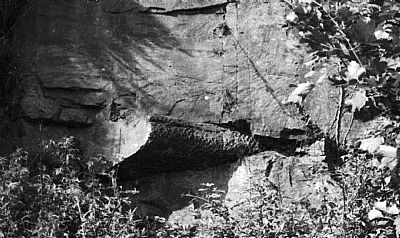 Another local example is cited in the 1868 edition of the National Gazetteer of Great Britain & Ireland,

'Ystradgynlais ……………… and other antiquities including erect fossil trees of the class Siggilaria discovered by Sir W Logan in the river bed.'

Fossils have been found in coal measures globally; those in the Neath area include Glynneath and Ynysarwed.

Some seventy five years after the Gnoll discovery, the Neath example is mentioned in an article published in the Western  Mail in February 1926 written by Dr FJ North, who was keeper of Geology at the National Museum of Wales in Cardiff. In the article he mentions that he was keen to locate the Neath specimen [he may have considered it superior to the one that was already held at Cardiff]. 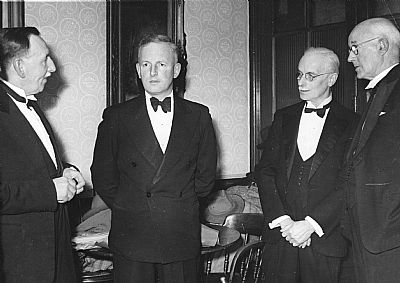 was the chief guest at the 3rd Annual Dinner of the Neath Antiquarian Society.

The name Lepidodendron comes from the Greek lepido, scale, and dendron, tree.

Now known as scale trees, they were a now extinct genus of primitive, vascular, arborescent (tree-like) plant related to the lycopsids (club mosses). They were part of the coal forest flora, sometimes reaching heights of over 30 metres (100 ft) and with trunks often over 1 m (3.3 ft) in diameter.  They thrived during the Carboniferous Period (about 360 to 286 million years ago). 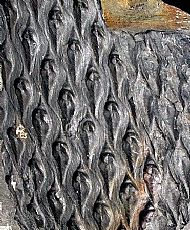 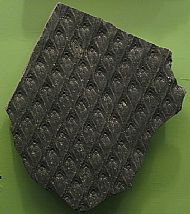 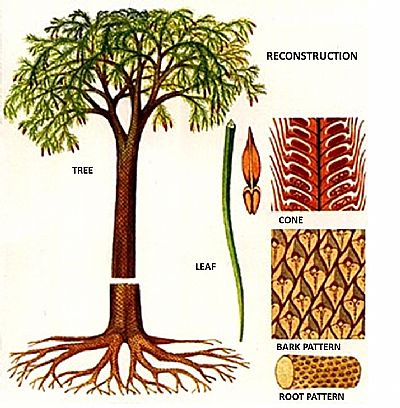 The closely packed diamond-shaped leaf scars left on the trunk and stems as the plant grew provide some of the most interesting and common fossils in Carboniferous shales and accompanying coal deposits. These fossils look much like tire tracks or alligator skin.

Lepidodendron has been likened to a giant herb. The trunks produced little wood, being mostly soft tissues. Most structural support came from a thick, bark-like region. This region remained around the trunk as a rigid layer that grew thicker, but did not flake off like that of most modern trees. As the tree grew, the leaf cushions expanded to accommodate the increasing width of the trunk.  They likely lived in the wettest parts of the coal swamps that existed during the Carboniferous period. They grew in dense stands, likely having as many as 1000 to 2000 giant clubmosses per hectare. This would have been possible because they did not branch until fully grown and would have spent much of their lives as unbranched poles.

In popular culture of the nineteenth century, due to the reptilian look of the diamond-shaped leaf scar pattern, the petrified trunks of Lepidodendron were frequently exhibited at fairgrounds by amateurs as giant fossil lizards or snakes. 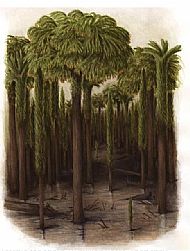 Treatise of the coalfield of South Wales - Frederick Moses, Neath - (18490

The American Cyclopaedia Vol.3 - George Ripley And Charles A Dana - (1873)