To set the scene of how Claudia Griffiths came to be an heiress we must firstly introduce her family.

Lewis Griffiths (2) was born in 1796 and settled in the Neath area around the end of the eighteenth century serving as land agent to the Ynysygerwn Estate of William Llewellyn [little did he know that his family would ultimately inherit part of it].  He was also Church warden at St Catwg's church, Cadoxton during the building of the new aisle in 1843.  The family at that time resided at Ynysgollen in a building which is now known as the Rock and Fountain Inn.  Later they lived at Ynysygerwn Fach, another house that still exists today.

Lewis Jones Griffiths (3) followed his father by also serving as land agent to the Ynysygerwn Estate.  He was described as a man of upright character, but he did not follow the family religious traditions. As a non-conformist he was one of five founders of Seion - Capel y Fforest Chapel in Aberdulais.  However, two members of the Griffiths family did go into the established church; being brothers Walter and David, who both became vicars after studying at university.

Walter Griffiths became vicar of Glyncorrwg.  He was active in the locality being one of the Neath Guardians and a member of the Board of Visitors to the Vernon House Asylum at Briton Ferry.  At the age of 48, Walter married Ann, the widow of Matthew Wayne (owner of the Carmarthen Tinplate Works) in 1852.  Ann was the daughter of William Llewellyn and had inherited the Dylais Fach Estate [1] in Tonna which at that time consisted of about 800 acres.

Following their move to Dylais Fach House they were both active in the Tonna community, being generous benefactors to the village and building a school room further down in the village to be called a school church[2], since at that time Tonna did not have a church.  The Cardiff Times reported on 15th November 1879 thus, -  ' TONNA - a Harvest Thanksgiving Service was held on Wednesday, at the School Church… Choice plants and fruit were supplied by Mrs Walter Griffiths, Dylais Fach.'

The Ruridecenal Conference of 1885 was held at Dylais Fach House after which Rev. and Mrs Griffiths entertained the clergy to lunch.

Highway improvements were needed at Llantwit Hill in 1869 and the Rev. Griffiths donated £20.  Richard Jones, (game keeper of the Dylais Fach Estate), was attacked by three men, two of whom were from Neath and one from Aberdulais. The men were proved to have been poaching on the property of Rev. Griffiths and consequently fined.  The incident was reported in the South Wales Daily News on 3rd February 1879. 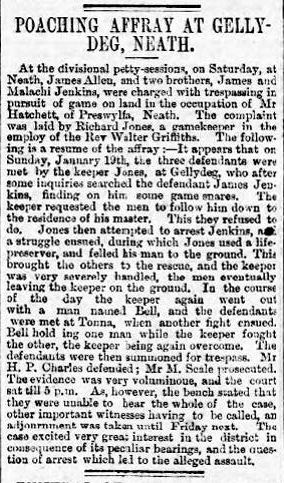 Sadly, Ann died in 1881 and Walter planned to build a church in her name on a parcel of land that had been gifted for the purpose.  Unfortunately, he died nine years later, before the project had started.

With no heirs born to Walter and Ann the Dylais Fach Estate was bequeathed to the surviving members of the Griffiths family collectively; being his sisters and the other vicar brother David Griffiths, who served the parish of Resolven. With the intention of carrying out his brother's wishes, the building of St. Anne's church now commenced.  The laying of the foundation stone took place on 6th November 1890 and was carried out by his sister Miss Mary Griffiths, who had been living with him at Resolven.  The ceremony was reported in both the Western Mail and The Cambrian the following day on 7th November 1890. Ironically David Griffiths also did not live long enough to see the project through to completion.

It is at this point in 1892 that the spinster sister Claudia Griffiths becomes heiress to the Estate and moves into Dylais Fach House along with her aforementioned spinster sister, Mary.  Records show that in 1841 (aged 10 and 15 respectively) they were both pupils at Miss Beal's School in the Ropewalk.

Claudia's personal life is by and large a mystery.  Regardless, she was very active in business and in the church. 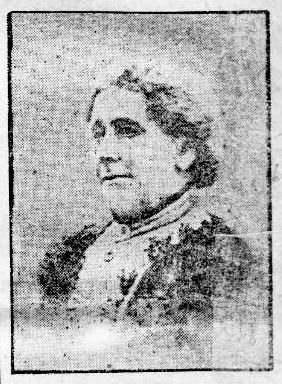 Claudia had been active at St. Catwg's, Cadoxton.  In 1883 she attended the service of dedication for the enlargement and damp proofing of the organ chamber.  The work had been completed by WG Vowles, a prestigious organ builder of Bristol.  The majority of the money for the work had been raised following a bazaar in 1881 with which she was involved.[3]

Naturally, Claudia would now fulfil the wishes of her deceased brothers’ by completing the building of St Anne’s church. Over her lifetime she gave generously to the church and furnished the building with many items including the superb west window in memory of her family.

There are many reported instances of kindness to the community:

An article entitled 'Seasonal Benevolence' speaks of Mrs Ritson of Dulais House and Miss Claudia Griffiths of Dylais Fach giving every household in Aberdulais and Tonna - 5lbs of beef, 4lbs of sugar and 1lb of tea on Christmas Eve.  These same households were given 20 tons of coal to distribute between them from the partners of Aberdulais Tinworks.[4]

Although the parishioners of Tonna were saddened when the popular Rev. Marsden left to take up a new living, a social evening was held in honour of him and his wife.  Here Claudia presented him with a gold hunter watch on behalf of the villagers of Aberdulais and Tonna, speaking warmly of the couple and that the gift was a token of their high esteem.  The watch was supplied by Davies & Son of Neath.[5]

Even when away from the village Miss Griffiths showed great concern for the welfare of her tenants.  Such as when she was in Bournemouth at the time when the drains of the disused Wenallt Level failed causing flooding and resulting in   the fields of Tonna Farm to be deposited with colliery waste.

The Coronation of  King Edward VII in 1902 was a time of national celebration and in Tonna the schoolchildren were treated to tea and cake by Claudia, her contempories, Mr and Mrs Ritson of Dulais House and Mr William Jones.  Each child (numbering about 500) was presented with a Testament by the Coronation Committee (willingly subscribed to by the village inhabitants) and  also a pencil case, given by the Llantwit Lower School Board.[6]

Unusually for the time, it seems that Claudia was involved in politics. There was a revision of the voting lists for the borough with Claudia and her sister Elizabeth being removed from the list for Dylais Lower, although their colleagues argued against it.

The district councillors along with a surveyor, clerk to the parish council and a Water Inspector, carried out a survey of Dylais Fach Estate to determine the best places to lay water mains to give the village a better water supply.  Claudia, along with adjoining landowners, was asked to give her permission.

Claudia’s cousin, James Benjamin Garsed Price acting as her solicitor, wrote to the district council threatening to cut off the water supply unless the rent of £10 was paid.  Mr Price said that there was a threat of flooding from the Wenallt colliery again.[8]

There was a campaign against the water supply being changed by the water company.  Claudia, along with her lessee Joshua Williams, was very vocal in petitioning.  They wanted to ensure a continued supply of water from the river Dulais so that the tinworks would be able to function.  The petition was successful and the water supply continued.[9]

Following a short illness, Claudia died on May 4th 1906 at 74 years of age with her doctor in attendance.  Being a wealthy lady, her will was reported in all the newspapers of the day as far afield as North Wales.  Newspaper reports vary but some give her considerable fortune for those days at £250,000; however, it is known that she also bequeathed £40,000 to various good causes. 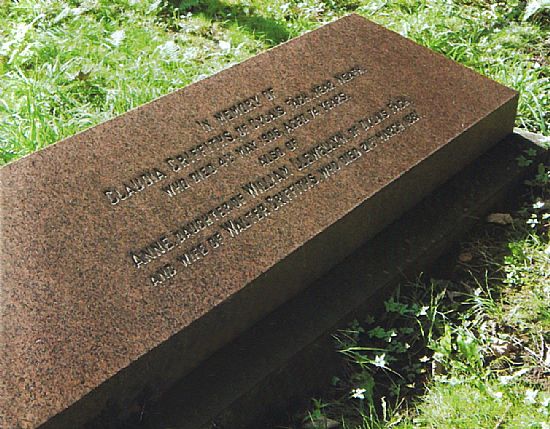 Under the terms of Claudia's will a scholarship was founded in 1907 at Jesus College, Oxford.  This was restricted to the sons of clergymen beneficed in Llandaff in the Oxford Welsh scholarships.  The first award was given to William Jones of Cowbridge Grammar School.

The Dylais Fach Estate was left to her cousin JBG Price but he had to sell off many portions of land in order to honour the legacies in Miss Griffiths' will.[10]  One such piece was Penvole Farm near Penwyllt which he sold to Baron Rolf Cederstrom[11]  for £197.10s.  Mr Price continued his cousin’s good works until he retired to Brecon. 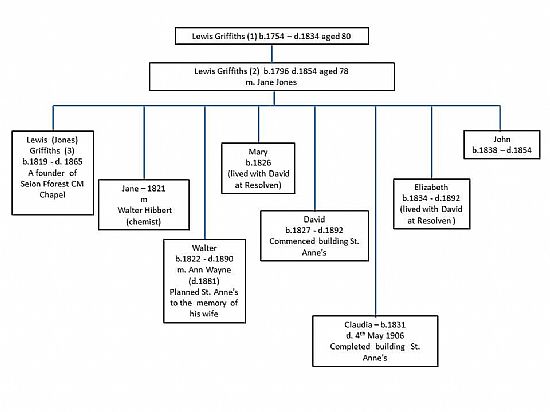 [1] This is the earlier (corrupt) spelling of what is today Dulais.

[2] The building still exists but is now a private residence.

[7] No longer owned by the church, it continues in a religious function as the Neath Islamic Cultural Centre