Edwin T Prosser, born in Wolverhampton on 14th April 1895, was an early British aviator, who reputedly flew a Bleriot [plane] at the age of 16.  He obtained his Royal Aero Club Aviator's Certificate from the Hendon Flying School in June 1913 and became a member of the Birmingham Aero Club.  Along with Mr A M Bonehill he built a glider of the Chanute type in August 1910 and they began offering towed passenger flights until the glider was destroyed by a gale on 26th August 1911.

The Amman Valley Chronicle reported on 30th October 1913 that Prosser had flown a 50 horsepower 'Caudron' biplane over Cwmamman - 'Every vantage point was thronged with people watching the first aeroplane flying through the district and, of course, like most other things, it went to Ammanford.' 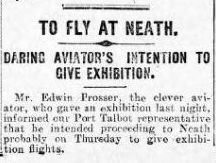 There were plans for him to give exhibition flights at Neath but this plan changed at the last minute.

Prosser later immigrated to Australia, where he trained pilots. His World War One service is recognised on the Ballarat Avenue of Honour. 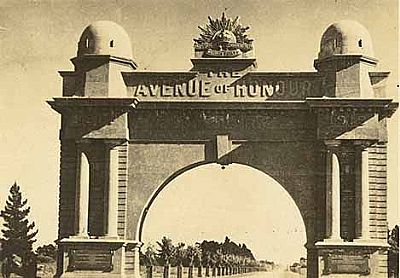