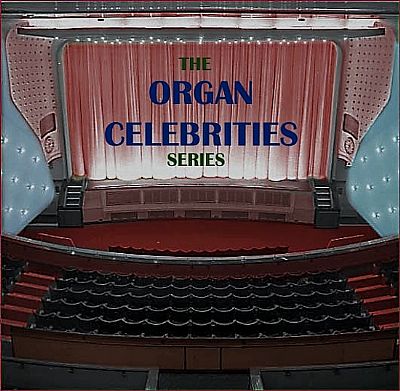 Yet another instance where the record company got it wrong, either by choice of genuine error. Additionally, a rare 78rpm disc where Harold & Charles play a delightful theatre/electronic organ duet..

There can't be many organists who had a recording session interupted by an earthquake....and lived to tell the tale. Experience the occasion with the actual tape recording.

Remember when you first heard STEREO LPs? Remember all the gimmicky recordings? You too could have a steam train thundering through your home!!Then suddenly WurliTzer pipe organs became the choice of instrument to demonstrate those 'woofers' & 'tweeters' and one organist at the forefront of such recording sessions was LEON BERRY.

Two almost identical CD covers.... yet once again all is not what it seems. The record company marketing boys turned to the computer in order to display an artist who does not exist. Not content with that, the 'computerised' organist on the cover is shown at an organ which is not the subject of the audio content!

An organist with two names who went on to make ( what is thought to be ) his one and only recording. Despite later popularity on BBC Radio programmes, he left England and from that moment on nothing seems to have been heard of him. Maybe you you have some information. Care to share it?

The one and only Leroy Lewis. Timeless artistry by one of the greatest theatre and electronic organists to ever come from the USA.. This short tribute contains some of the rarest recordings he made: tracks that are as fresh today as they were when he recorded them several decades ago.

A mystery organist who, for a long time, was responsible for a couple of LPs which contained some unusual and exciting arrangements. The story surrounding him has been told many times, but maybe you have not heard the music.

One of the strangest, yet amusing organ world stories, that you'll just have to see it to believe it.

Another instance of a Record Company marketing some recordings that are not all that they purported to be. An interesting story from 'down under'

In his very short lifetime KEN GRIFFIN became a prolific recording artist, and to this day his recordings, despite their somewhat simplistic style, are constant good sellers.  One of his strangest recordings is the one that indicates he's playing a theatre organ!   There are whole Web pages devoted to him, and fans from around the world remember with affection his TV shows, an extract of which is contained here.  It was impossible to cover all his contributions to the world of organ playing in one video, so for the first time in this series, there is more to be enjoyed in Part 2.

Some more music from this sadly missed pioneering Hammond organist, and another short extract from his short lived TV show 67 MELODY LANE, featuring Marjorie Meinert.  Additionally, a colourful selection of some of the many LP covers that contained his recordings.