All 5 Club Members have again been selected to play for the Senior County Side against the reigning champions South Glamorgan CBA away at Llanbradach on Tuesday 07/06/22, namely Colin Davies, Colin Smith, Martyn Harries, Byron John and John Wilson

3 Club Members have been selected for the Championship team to play against reigning County Champions Monmouthshire, namely John Morgans, Peter Williams and Colin Davies with Josh Hancock being a Reserve

All 5 Club Members who took part in the trial for the Senior Championsip Team have been selected to play against the Vale of Glamorgan CBA, namely Colin Davies, Colin Smith, Martyn Harries, Byron John and John Wilson

4 Club Members have been selected for the above trial namely John Morgans, Peter Williams, Josh Hancock and Colin Davies

A very enjoyable 6 rink game with some 60 members of the London Welsh Bowling Association in attendance on the day .  The game itself was played in an excellent competitive spirit which was also helped by the good weather and the green which was running exceptionally well for the time of year.  This also showed in the good quality bowling on show with the final score favouring the visitors 95 - 92.

The game was followed by refreshments in the pavilion with members of London Welsh also providing some entertainment with their singing of some Welsh classics. Everyone present had a good time and friendships were made.

The Club looks forward to hosting the members of London Welsh Bowling Association once again sometime in the future.

The 2022 season will start on Tuesday Evening 12th April with a "fish and chip night"  with presentations also being made to last year's club tournament winners and runners up.

On Saturday 16th at 09:30 a.m. all members are requested to meet at the Club to do some work around the green to prepare for the new bowling season.  Small working groups will be set up to undertake various tasks (brush & clear the ditches to lay the rubber mats, litter picking, power washing the slabs in front of the pavilion, wipe down the benches & check the wooden benches for any damage, clear any moss around the pavilion & tidy up the area around the shed). This work will ensure that we are ready for playing bowls on the Opening Day.

Opening Day 2022  AN EXCELLENT AFTERNOON WITH 5 RINKS IN PLAY, NICE TO SEE SOME NEW MEMBERS THOROUGHLY ENJOYING THEMSELVES AND MAKING SOME NEW FRIENDS

The Club will officially open for play on Saturday 23rd April, 2022 and will kick off at 2.00 p.m. with a friendly game amongst members and newcomers with the Club Captain and Vice Captain selecting teams to play each other.

The WBA has decided that the winners of the various tournaments held in 2019 and 2021 will play off against each other for the right to represent Wales and to compete in the 2022 BIBC Championships which are to be held in Llandrindod Wells in the first week of July.

This means that the Club's 2019 Welsh Senior Fours Champions (Nigel George, Colin Davies, Colin Smith, Martyn Harries and Emilio Garcia)  will have to play off against the 2021 Champions from Saundersfoot B.C.

2021 Despite various COVID considerations it has been a very mixed season for the Men’s section of the Club.  The Club was relegated from the Llanelli League’s Premier Division to the 1st Division despite accumulating more points than it had in the 2019 season but on the plus side the Club won the Thursday night League in the Western Section of the Welsh Private Greens League

Unfortunately, the Ladies Section could not compete in the Dinefwr Ladies League due to the League being postponed until 2022.  However some of the Ladies were able to play in some of the Men's section 's Llanelli League and Private greens fixtures during the season

Congratulations and commiserations to the Winners and Runners-up in the Club’s tournament finals. The games were all played in a fantastic spirit and there was some good quality bowling shown by all that took part.

Results were as follows:

Colin Davies won against Brian Hewitt. Great achievement by Brian in getting to the final and beating some more experienced bowlers on the way to the final and in his first year of membership!!

The day concluded with the Champions of Champions final between Colin Davies and Dennis Thomas, it was  very good and closely fought competitive game with Colin Davies eventually coming out on top and lifting the trophy

2019 has been a very successful season on the green for Carmarthen Bowling club with successes throughout the club.

In the WBA competitions a combination of  Nigel George, Emilio Garcia, Colin Davies, Colin Smith and Martyn Harries won the Welsh over 60s fours where they had to win  7 games in order to win the competition. However, they did not do it the easy way, they were 18 4 down in the Semi Final to a rink from the Vale of Glamorgan with 6 ends to go.  Following a shot to pick up 6 shots they monopolised the next 5 ends and edged the contest winning on the last end.

In the final, they romped home to victory over a rink from Mid Wales, winning with  a few ends spare.

In the Llanelli League, the club struggled due to a loss of players this season. However, we managed to stay in the Premier division picking up 36 points in our last 3 games finishing 7th where we gained 16 more points this season than the last.

In the private greens, the club had a very good season where we finished 2nd in the Thurday league. in the PGL competitions. John Morgans and Peter Williams romped home in the pairs winning the competition.

In the Club competitions, Josh Hancock won the Club Champions of champions. He also won the Men's open and Handycap against Jon Morris and Richard Jones respectively. Glyn Williams won the Rosebowl (non-winners cup) and Thelma Evans defended her title in the Ladies open

Congratulations and Commiserations to the Winners and Runners-up at Carmarthen Bowling Club today. The games were played in a fantasitic spirit and there was a good quality of bowls shown today.

The day concluded with the champions of champions with Cliff Hyde and Hugh Morgan coming through their semi-finals to reach the final. it was a worthy final at the end of the season with Hugh coming out on top 21-12 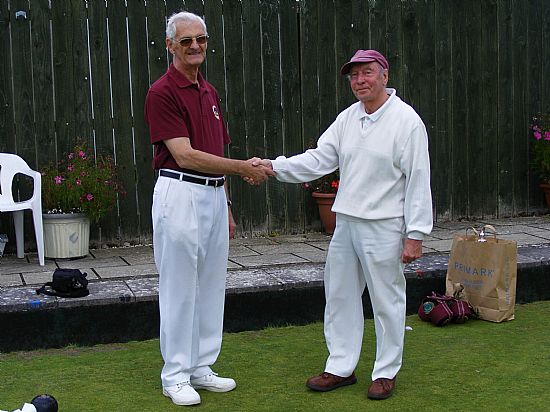 It has been a season of highs and lows for Carmarthen Bowling Club this year.

The Private Greens team had a very successful season where they finished 2nd in the Thursday league where they have gained promotion to Division one. They Finished 5th in the Saturday League.

Carmarthen also had a good run in the Welsh Cup where we won 4 of our group games ot finish top of the group. The Reward of this was a tough trip to 2017 Mid Wales Champions Presteigne where we fought hard to come out winners by 2 shots.

In the game of the Last 32. We played local Llanelli League Rivals Parc y Dre on very tricky fast green away parc y dre. It was a high scoring game where Carmarthen came out on the losing side 92 - 103.

Outside the league. The club also had a good season in the cup competitions.

In the Private greens. The Pairs and Triples reached the final missing out on the day by a few shots.

They were helped by Nigel George in the over 60s fours to do the double. 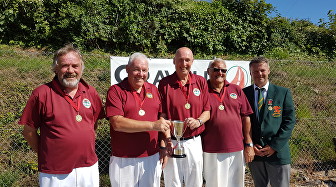 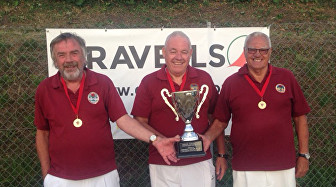