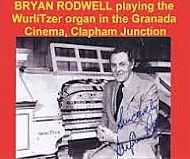 Bryan Rodwell was born in Kieghley in Yorkshire, England. (8th June 1929 not verified)
Bryan studied the classical piano at an early age and then he moved on to the organ,Bryan's future changed when he came into contact with theatre organist Charles Saxby, who was responsible for encouraging Bryan to consider playing the theatre organ. He made his debut performance at the age of just 10 years of age. He had the rare talent of being comfortable playing either pipe or electronic organ. Bryan's early career was on theatre organ. He was employed to play for the ABC Cinema chain at The Ritz in Hereford and also at The Granada in Clapham, London. It was during this time that he made a number of recordings and broadcasts.
In 1968 Bryan Rodwell took up a position with Hammond UK, where he was demonstrator for many years. He later moved on to be more involved with Hammond managing the quality development department. He made a number of recordings on the Hammond 'Concorde'. As well as Hammond Bryan played many other electronic organs, including Rogers and Orla. He spent the last few years playing Yamaha EL90.
Bryan was a versatile musician who also played for many of the large orchestras of the time, including Mantovani, Geoff Love and Stanley Black
Bryan died in 1995.