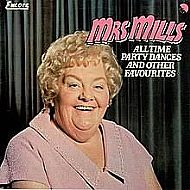 Gladys Mills, née Gladys Jordan (29 August 1918 – 24 February 1978), known as Mrs Mills, was an English pianist who was active in the 1960s and 1970s, and who released many records. Her repertoire included many sing-along and party tunes made popular in the music hall.

By the end of January 1962, she would be a household name, rising to fame during the same period as her stable-mates The Beatles, with whom she had shared space at Abbey Road Studios (as mentioned in the Beatles Anthology DVD bonus materials). Her career as an entertainer was to last well into the 1970s.

She was signed to a management contract by Eric Easton, who later went on to manage The Dave Clark Five and The Rolling Stones, and then signed a recording contract with Parlophone.

In 1961 she released her first record, "Mrs Mills Medley", a single that entered the Top Twenty of the UK Singles Chart.  She toured the UK, making many appearances on TV and radio throughout the 1960s. Mills was also a successful recording artist overseas in territories where there were large numbers of expatriates from the UK, including Australia, Canada and Hong Kong.

Mills appeared on two episodes of The Morecambe and Wise Show in 1971 and 1974, where she performed a medley of favourites with the studio orchestra (see video below).   In 1973 she appeared in an episode of The Wheeltappers and Shunters Social Club.

In December 1974 she appeared as the subject of This Is Your Life, hosted by Eamonn Andrews, when it was revealed that the first record she had recorded was "The Girl in Calico", cut in a make-your-own-record booth on Southend Pier, for a half-crown, with her girlhood pal Lily Dormer.

Little was seen of Mills on television in her final years and she died of a heart attack on 24 February 1978 in London at the age of 60.