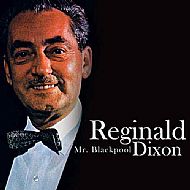 Reginald Herbert Dixon, MBE, ARCM (16 October 1904 – 9 May 1985) was an English theatre organist who was primarily known for his position as organist at the Tower Ballroom, Blackpool, a position he held from March 1930 until March 1970. He made and sold more recordings than any other British organist before him, or since. He was in high demand throughout the 1930s, 40s, 50s, 60s and 70s. During his fifty-year career he was one of the top-selling artists, his prolific output ranking alongside that of Victor Silvester and Bing Crosby.

He was awarded Associate of the Royal College of Music (ARCM) when he was 17 years old.

In March 1930, Dixon was invited to audition for the position of organist at Blackpool's Tower Ballroom, which, at the time, contained a 2/10 Wurlitzer. Previous to this audition, there had been two other organists, Max Bruce and James Hodgetts FRCO. The Wurlitzer's job had been to provide music for dancing, however, and neither organist could tackle the difficult task of keeping a strict tempo. After auditioning, Dixon was given a trial, with the ultimatum that, if he did not make a success of playing the Wurlitzer for dancing, both he and the Wurlitzer would go. Once he had mastered playing in strict tempo.

Dixon further developed his playing style, with a strong bass line, and both hands providing accompaniment and melody. Dixon was mainly left handed and he often played the accompaniment rhythm with his left hand as well as the melody using second touch. This left his right hand free to supplement the music. This became Dixon's trade mark instantly recognisable style. Soon enough, Dixon had fully exploited the 2/10 Wurlitzer's capabilities. Since this was holding him back, and the dancers, this made Dixon plan a larger, more suitable instrument. Within weeks of his appointment at the Tower, the BBC were broadcasting Mr R. H Dixon from the Tower Ballroom, Blackpool.