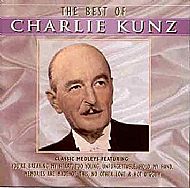 Charles Leonard Kunz (August 18, 1896 – March 16, 1958) was an American-born British musician popular during the British dance band era, and who became the wizard of the piano.

Charles was born in Allentown, Pennsylvania, the only son of Margaret T. (Wehr) and Leonard Kunz, a master baker who played the French horn. He made his debut aged six and made his first appearance as a prodigy aged seven. During World War I he led his own resident band, while working in a munitions factory.

He came to the United Kingdom in 1922 as a pianist in a small dance band. He was to remain there until his death from a heart attack in 1958. He is buried in Streatham Vale Cemetery.

He was such a distinctive and popular pianist that he abandoned his orchestra to concentrate on his piano playing, both at music hall venues and on the BBC. Two of Britain's most famous female vocalists were with his orchestra in the 1930s: Vera Lynn and Welsh songstress Dorothy Squires. His best known crooner was George Barclay.

Kunz was the pianist in a dance band which was led by the drummer, Ed Krick. The band came to London in 1921 to play a residency in the London Trocadero..

His debut as a soloist came in 1934 at the Holborn Empire, London followed by countless variety theatres in Britain and the Continent, after playing in hotels, restaurants and ballrooms. The same year saw the beginning of what was to become a continuous output of solo records of "Charlie Kunz Medleys". His signature tune was "Clap Hands, Here Comes Charlie", and his closing theme was "Pink Elephants"

He became the highest paid pianist in the world, earning up to £1,000 a week.  His piano transcriptions sold widely in the teaching of piano-playing. Kunz's playing style was a relaxed flowing interpretation of popular melodies played with subtle soft and loud accents, which he called "melody and rhythm with expression”.

He died on 16th March 1958 at the age of 62 and is buried at Streatham Park Cementery, London.