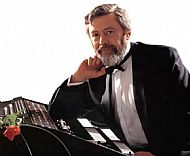 Klaus Wunderlich was a German musician born in Chemnitz in 1931 and played the Hammond organ during the first half of his career, and later switched to Wersi organs and Moog synthesizers with which he created his own unique electronic sound.

Klaus Wunderlich was open to different music styles and played classical, operetta, Broadway musical, as well as popular music. He sold more than 20 million records all over the world and received 13 golden albums as well as one golden cassette. He has something of a cult following, and pops up from time to time in the playlists of contemporary DJs.

From 1978 to 1995 he made seven tours of the UK which were were organised by Kennedy Street Enterprises playing to packed theatres on every occasion, they included the London Albert Hall (17th April 1978), London Royal Festival Hall (8th March 1984) and the London Palladium (19th October 1986).  There were 159 concerts in total.

In October 1985 he spent a week at the Caister Keyboard Cavalcade Festival with over 1,000 music enthusiasts. In 1991 he enjoyed a weekend with his Appreciation Soceity at Pontin's Osmington Bay, Weymouth

About his GOLD awards:
Back to Top