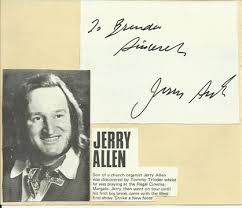 Jerry Allen (1925-1985) was the son of a church organist, and spent his formative years in Margate. He unfortunately suffered from polio as a child, and was overcoming this disability when at the age of fifteen, in 1940, he obtained his first job playing the organ at his local Regal cinema. The cinema became the victim of an air raid, but not before the youngster had been discovered by the comedian Tommy Trinder, who took him on tour.
Playing various dates around the country provided the young man with invaluable experience, and his first big break came early in 1943 when he appeared at London's Prince of Wales theatre in the Sid Field revue 'Strike a New Note'. Morecambe and Wise were also on the bill.
In this same year he made his first recordings with his newly-formed trio, in the Decca 'Music While You Work' series, and half a dozen of these scarce recordings open our collection.
The trio took to travelling the country in an old ambulance, and maintained a busy schedule playing many variety dates. Radio dates and hotel booking further enhanced their popularity.
In September 1954, Jerry Allen and His Trio (now numbering four members in all), returned to the Decca studios and cut A Sky Blue Shirt And A Rainbow Tie and Small Talk. A couple of months later they returned to record S'posin', When I Need You Most, Kind and Delauany's Dilenna. They also enjoyed the distinction of being featured opposite Ted Heath and His Music at one of their London Palladium Swing Sessions.
In addition to Jerry on the Hammond organ, the trio comprised Alan Grahame (still active on the music scene today) on vibes, Ken Ingarfield on bass and percussionist Lionel Rubin. Lionel had been the power-house drummer with the Nat Gonella band.
The group's big break came in 1956 when Lew Grade booked them to provide the musical backing on Associated Television's 'Lunch Box', the popular Monday-to-Friday midday show hosted by Noele Gordon. Noele was to become known to millions as Meg Richardson in 'Crossroads'. 'Lunch Box' enjoyed an eight year run, and the trio were involved with several other television series, becoming one of the countries most televised groups.
The Hedgehopper and later Lunch Boxer were used as the theme tunes of 'Lunch Box', whilst The Lonely Road preceded the programme's daily "Memory Lane" spot.
In 1962 Jerry formed his own big band which included many of the top Midlands musicians. Pianist John Patrick eventually took over the band's leadership whilst Jerry became more involved with session work and arranging. Additionally, he spent the rest of his working life travelling the country and giving promotional concerts for the Lowrey Organ Company.
Illness struck in the early Eighties, leading to a spell in London's Royal Free Hospital. Jerry rallied, but unfortunately died on 17 July 1985, a few weeks shy of his 60th birthday.