Going to School in Cromarty

Our final ‘Memories’ session was in the Primary School last Thursday, when a group from the Fourways club who had all been pupils at the school many years ago met with the P6/7 class to trade experiences of schooling in Cromarty. Garve Scott-Lodge’s photo below shows what an attractive building the school is.

Like so many Scottish schools it was built in the 1870s, following the passage of the 1872 Education Act which removed education from church control and made it the State’s responsibility. Before it was built, local children were schooled in either the Parish Church school on Shore Street (the late Corrie Bathie’s house, where Hugh Miller went to school) or in the Free Church school, now Speybank, on the Braehead.

It was disappointing to learn, on Thursday, that there are now fewer than 60 pupils at the school. The Fourways visitors remembered classes of more than 30 pupils, with 200 plus in the whole school. But it needs to be borne in mind that up to the 1950s Cromarty was a ‘Higher Grade School’ - taking pupils right up to the minimum school-leaving age. So subjects like French, Algebra, Physics and even Latin were on the curriculum for the older pupils. After that, pupils who wanted to sit their Highers would transfer to Fortrose Academy.
When the leaving age was increased to 15 in 1947, Cromarty had to add a HORSA hut (Hutting Operation for the Raising of the School Leaving Age). This ‘temporary’ building in the playground was only demolished about eighteen months ago.
The school has a canteen now, built in the late 1940s, and most of the children seem to stay for school lunches.The Fourways visitors remembered going home for their dinners - something not possible for the pupils who had walked to school from the outlying farms. They did, however, get a mug of cocoa at the morning playtime, and the ‘school cocoa fund’ was one of the Cromarty good causes that depended on local fund-raising. 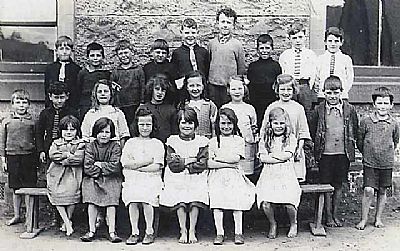 There are plenty of class photos on the Cromarty Image Library. I’ve added the 1926 one, mainly because the bare feet tell us something about living conditions at the time.

And to finish off, a vision of a possible future - a 2004 drawing of the proposed refurbishment of the school. If that’s to come about, we’re going to need a few more pupils than we have now. 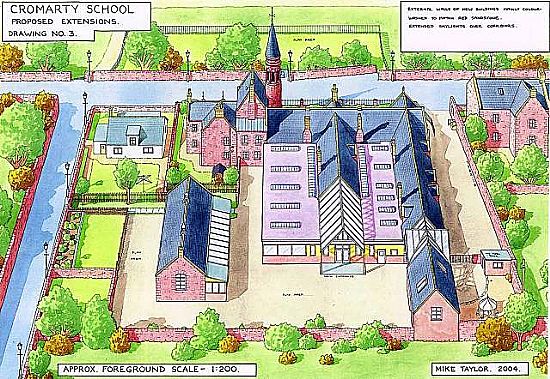