Slaughter and Rubbish in Cromarty

It's not just the grand houses in Cromartythat have an interesting history. The modest wee shed below has a few stories to tell. It's Robert Hogg's shed beside the ferry slipway. I don't know what's inside it nowadays - I'm guessing bits and pieces of marine engines - but back in the 1930s this was the town's slaughterhouse. Before the war the local butchers disposed of sheep, cattle and pigs here. There's a runnel in the concrete floor to drain away the blood, and the roof beams are strong enough to take the weight of the carcasses that used to hang from them. 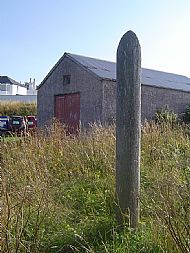 And outside is one of the most interesting relics of Cromarty's past. This is the 'dirt stick'. It used to stand on the beach below the high tide mark, and marked the spot where rubbish could be dumped to be carried away by the tides. The Town Council dustman used to dump the collected waste here each day, and the tides duly took it away. After it had been knocked down a few times, Bobby Hogg rescued it and concreted it into the ground in its present location.

There was a much older slaughterhouse in Cromarty, built by George Middleton at the end of the 18th century, roughly on the site of the Royal Hotel. It was for the bacon and salt pork business, and the path down which the pigs were driven is still known as the Slooch Moochd, a rendering of the Gaelic slochd na muic (the pigs' pass). It's the only Gaelic street name in Cromarty.

Apologies to vegetarians for the grisly nature of this week's blog!

Comment from Liz Scott at 11:55 on 10 July 2016.
came across the sign for Slooch Moochd on the Cromarty Open Gardens day yesterday - so Googled it and found your blog here! Interesting stuff, many thanks!
Comment from Sandy at 17:33 on 29 November 2016.
Thanks Liz! Hope you enjoyed the gardens.