One subject we haven’t talked about in our ‘Memories’ sessions is Health. There must be so many stories about past Cromarty GPs and about the building on the right - the old Cottage Hospital, now the private home Gisbourne.
This was built in 1894 on land donated free by General Ross. It was a serious measles epidemic which triggered demands for a local hospital, but not everyone supported the idea.

Some letter-writers to the 'Cromarty News' thought it was a waste of money, and one person suggested converting the Gaelic Chapel to a hospital instead.

It cost £1,010 to build and all of that money was raised through voluntary subscriptions and local fundraising. There was even a ball held in London, organised by Cromarty exiles, to raise funds. The fundraising continued in support of the hospital right up to the creation of the NHS in 1948, via the usual fetes, dances, silver paper collections, and so on. 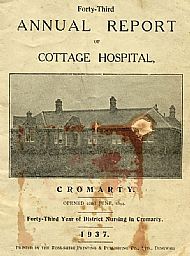 There was a resident District Nurse and the local GP was the Medical Officer. Clem Watson has a copy of the hospital’s Annual Report for 1937/38 - see left - which gives a flavour of its activities. Twenty-three cases were treated in the wards of the Hospital during the year, which doesn’t seem an awful lot. Nine of these were Maternity cases. The Nurse was kept busy however. She paid 2451 District visits, and 2035 visits were paid by patients to the Dispensary. Income for the year was 280 pounds, ten shillings and fivepence. This included a donation of £7 and 11 shillings being the proceeds of a Whist Drive and Dance organised by the crew of SS Osterhav, and another of £25 from a concert by the Harmonica Band of HMS Rodney.

The hospital in pre-NHS days was run as a charitable trust, with the Trustees being the usual suspects (the minister, the provost, the sheriff of the county and, of course, the laird), but the day-to-day running was in the hands of a management board. In 1937 this included Eric Malcolm’s father (the local headmaster), Dr Middleton of Davidston, Miss A Murray of St. Ann’s (sister of the legendary Sutherland Murray), Mr W Scott of Rosenberg and several others. In fact, if you lived in one of the ‘big houses’ in Cromarty you were pretty well bound to be on the Cottage Hospital Board of Management.

The hospital continued in use under the NHS, mainly as a maternity hospital, but finally closed its doors in 1954.

Incidentally the house next door to the hospital, the ‘White House’, was built between the wars for the local GP and Medical Officer, Dr Gibson. It was really modern. It had a garage door operated by a photo-electric cell that opened automatically when his car entered the driveway. I must ask David Ross if it still works.

Comment from Jon Palmer at 12:02 on 15 September 2013.
There has been talk of turning the old cottage hospital into a care home - for elderly residents who need support but don't want to move out of the town. I wonder how much could be raised by voluntary subscription to buy it and how that would compare to £1000 in today's money!
Comment from Calum Davidson at 19:13 on 15 September 2013.
And of course Paye House was the Doctors residence through the 70's - until the surgery in Allan Square was built, I seem to recall.
Comment from Mary Peteranna at 22:24 on 17 September 2013.
Thanks, Sandy - and I have been curious about the White House; nothing came up within my earshot at the sessions!
Comment from Lillian Kuzmicki at 11:54 on 14 February 2014.
I was born in the Cottage Hospital on 21.02.1953 & was curious to see a photo of it. It's a beautiful building & I'm happy it's still standing after so long!I hadn't realised it closed the year after I was born.
Comment from Sandy at 20:28 on 15 February 2014.
My goodness, Lilian - you must be one of the last true Cromarty babes!
Comment from Paul at 08:46 on 03 July 2014.
I believe its now going to be turned onto a cottage and holiday home
Comment from Dan Rowley at 16:40 on 27 September 2016.
I was born in the Cottage Hospital in 1951. I'm told it's now a B&B ? Hoping to visit the area this winter (2016) Dan
Comment from Sandy at 17:35 on 29 November 2016.
Thanks Dan. Another Cromarty baby!
Comment from Mike Groat at 01:03 on 03 November 2019.
I was born there on 18.09.52. Cromarty has a lot of history realy worth checking it out great place.