It’s Doors Open Day this coming Saturday, but unfortunately Cromarty House and Stables won’t be open this year because of the stone-carving workshop taking place there - which means I won’t be delivering guided tours of the house. It’s a pity, because there are so many good stories about the house and stables. Every year I have been doing these tours, people have told me tales about the buildings and what went on in them. Here are a couple to keep us going till next year.

There is a faint red stain on the wooden floorboards just outside the dining room at the foot of the stairs. The story that the Rosses passed onto the Nightingales is that an early 19th century Ross laird had a son that he didn’t think much of. The young man had one particular skill, however, and he was proud of it. He could carve an excellent Sunday roast. So one Sunday lunchtime, the young chap was demonstrating his skill with a carving knife when his father made a cutting comment along the lines of ‘small things appealing to small minds’. The young man rushed out of the dining room in tears of rage, and stabbed himself  fatally in the chest at the foot of the stairs.

On a lighter note . . . what was Lady Ross’s bedroom is separated from the dining room by the enormous drawing room. As anyone who has been in the house knows, it can be perishing cold in winter, and the family economised by heating only the few rooms that they used - which didn’t include the drawing room. Lady Ross’s ingenious solution - or maybe it was her husband’s - was to rig up a kind of canvas walkway between her bedroom and the dining room - like an enclosed tent - so that she could scurry from one warm room to another without getting frozen. You can still see the marks on the floor where the walkway used to be.

Can anyone tell me any more tales about the house or the stables? 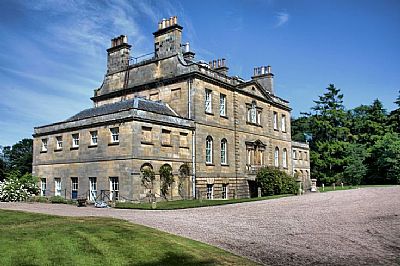 Comment from Eleanor Dalziel at 21:56 on 08 September 2013.
Am right in saying Cromarty house was sold to an English couple around 1969, they only used part of it as a holiday home? Who owns it now? My uncle Jim ( James Maclean well known local and character!!) was caretaker of the house at this time and gave us a grand tour, although not to the private quarters of the owners, this included a visit to the attic rooms which were the servants quarters, only my husband climbed up to the loft rooms I didn't go with them, wish I had now.
Eleanor Dalziel.
Comment from Sandy at 09:28 on 09 September 2013.
Thanks Eleanor! You're right that Michael Nightingale bought the house in the late 1960s, and it is now owned by his eldest son, John. The Nightingales have done a lot of restoration of the house and make use of virtually all the rooms. Like you, I have never got up to the attics.
Comment from Angelica Conran at 19:11 on 10 August 2019.
I stayed with my family as guests at the Nightingale’s at Cromarty House but that would’ve been early 60’s. I remember lots and lots of stairs and lots of bees and hemlock growing in the grounds!