Cromarty Arts Trust is running a writing and photography competition right now with the theme of ‘My Favourite Building.’ My guess is that the best-loved building in Cromarty is probably our Victoria Hall. Built in 1887 to mark the Golden Jubilee of Queen Victoria it was initially the drill hall of the Cromarty Volunteer Company of Artillery, but it has seen all sorts of action over the past 126 years- plays, film shows, badminton, keep-fit,

One of these plays was a world premiere by the way. A young Lieutenant aboard HMS Repulse called Ian Hay wrote a play in 1917 called ‘The Middle Watch’ while his ship was at anchor in the Firth and it was performed in the Hall. It became very well-known, and was made into a film in 1930 and again in 1940 - starring Jack Buchanan. Yet another first for Cromarty.

I know that Alison Watson was one of the stalwarts of the Cromarty Amateur Dramatics Club, but I can’t find her in the photo below, although there are lots of other familiar faces. 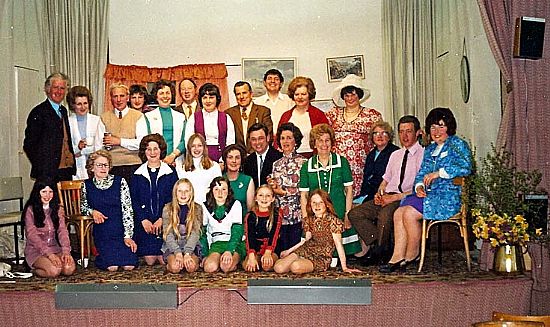 We have had quite a few celebrities at the hall 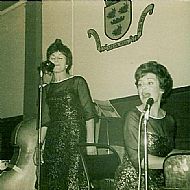 over the years. Our very own Ian Rankin spoke there last year at the Crime and Thrillers Weekend, and back in the 1930s there was a performance by the internationally-renowned, Scots-born, lyric tenor Joseph Hislop. He was a mega-star who had sung leading roles at La Scala Milan and Covent Garden, so how we got him to Cromarty I don’t know. And I wonder how many of you would recognise this musical double-act on the right? No-one under 50 I guess! They are the stars of the BBC’s ‘White Heather Club’ Anne and Laura Brand. In the 1960s they holidayed every year in Cromarty, staying at the Royal Hotel.

The Hall got a much-needed make-over in 2003, and the picture below shows the Fourways Club enjoying a concert in their new surroundings.