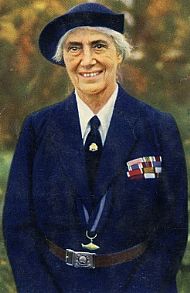 When 23 year-old Olave St Claire Soames married 55 year old Robert Baden-Powell in 1912, she caused an international sensation, and despair to 100,000 Boy Scouts who speculated that the marriage would bring an end to the Chief's Scouting.

Instead the exuberant tomboy's boundless energy lead to an unflagging support of BP and helped Scouting to grow even faster. Her own vision saw Guiding become the largest organisation for girls and women ever seen, and led her to be called "The Mother of Millions".
Guiding has significantly influenced the shape of our society, and will continue to do so into the future. I hope you can capture here a piece of the vibrant vision of this extraordinary woman.
This site is endeavoring to cover much of her life, from birth, through her time with BP, and the work she carried on long after his death.

They were married for 28 years, but she was a widow for 36 years.

In 1916 Olave was enrolled as a Guide. Love and service to God, country and other people were the powers that directed her life.
In 1938 the World Chief Guide went with BP, whose health was failing, to their home 'Paxtu' in Kenya. There they lived the open-air life they both loved, and there two years later Robert Baden-Powell died.
In 1973 the United Nations honoured Olave Baden Powell as Woman of the Year by awarding her the Ceres Medal.
She was decorated with national honours by Chile, Finland, Greece, Haiti, Japan, Lebanon, Panama, Peru, Poland and the United Kingdom.
She was an indefatigable traveller, visiting 111 countries in all.
Her role in Guiding changed with age, but she constantly kept its growth foremost in her life, identifying opportunities for established Guiding countries to assist new ones. She redirected many personal gifts to Guiding. She told would-be flower donors that "flowers do not go with Guide uniform", and "souvenirs are an embarrassment to carry around when one is travelling light, hurrying from city to city by car or train or plane for weeks and months on end ". Australian Guiding developed a unique gift idea, 'Ice-cream for the Chief', and American Scouts generously supplied a credit card for her use from 1968 until her death.

22 February
Olave St Clair Soames is born in Stubbing Court, Chesterfield, England
At the time of her birth, her mother was unsure if either of them would survive
Also on this day, Robert Baden Powell celebrated his 32nd birthday

1910-1912
The Girl Guides Association of the United Kingdom was formed for those "Girl Scouts" who had presented themselves at the 1909 rally of Boy Scouts in Crystal Palace, London. BP Asked his sister, Agnes, to write a book for them, along the lines of Scouting for Boys. She became the Association's first President
The first Girl Guide groups start in various parts of Australia

1912 - Age 23
Olave meets Robert Baden-Powell during a cruise on the Arcadian to the West Indies. He was "The only interesting person on board!"
September 20
Olave and BP become engaged
October 30
Olave and BP are married
Girl Scouting begins in the USA, by Juliette Gordon-Lowe

1914
Olave learns to drive, acts as BP's chauffeur - he didn't like driving
Olave was a warranted Scout leader. It was with 1st Ewhurst Scout Troop, the troop she and BP started at their home for their staff

1915
Heather, elder daughter, born (her name chosen by the Guides)
September
Olave arrives in France as a Scout recruit to work with YMCA in 'respite huts' for troops. Children cared for by Olave's mother

1919, aged 30
Olave forms the International Council - the forerunner of WAGGGS
Olave writes to women in Brazil, asking them to consider starting Girl Guides
Olave's sister Auriol dies; Robert and Olave take over the up-bringing of her three little girls, so effectively now have six children.

1929 Aged 40
August - Liverpool Jamboree
Pax Hill burgled, many souvenirs stolen
Another cruise to the West Indies, on the Alcantara
Visit to the USA

Gillian born to Betty in Rhodesia

They acquire a hyrax as a house pet

1940
Family reunion in Kenya. Heather was in the ATS so missed the reunion
BP ill again
World Conference in France - not held because of WW2

1941
8 January. BP Dies at Paxtu, Kenya. Olave could not attend, spent the day of the funeral weeping and walking "in agonised grief" Olave was 51
Thousands of letters from all over the world are sent to Kenya
Olave goes on a 3 month tour of Africa in a truck with niece Christian

1942
Depression set in on return to Nyeri
Tours South Africa
Moves back to UK - very frightening cruise back through u-boat attacks
Guiding starts to raise funds for relief teams to assist in liberated areas of Europe. (Guide International Service) (GIS)
No home- Pax Hill was occupied by Canadian troops. She was awarded a 'grace and favour' apartment in Hampton Court
Birth of Heather's son Michael

1943
Although rationing bites hard, Olave entertains many ex-Scout servicemen from all over the world
Cycling became part of her life again to overcome crowded, limited, and slow transport
Baden Powell Memorial fund appeal launched - Princess Margaret was the star in first fund-raising concert

1944 - Age 55
First relief teams are sent to assist in liberated areas of Europe (Guide International Service)
Continual touring of UK to "keep the spirits high and the ideals bright"
A V2 Rocket brings down ceiling of Olave's apartment in summer - she was touring the Midlands at the time
Olave starts to learn French so she can go into Europe
Lays wreaths at war memorials in towns all over France, Switzerland, Italy, Luxembourg, Belgium

Olave starts to travel to the war-torn countries of Europe, to revive Guiding and Scouting
From Olave's diary (as noted in welcome booklet, visit to Australia 1958)
St. George's Day., Attended Scout and Guide celebrations of freedom in Paris. Toured through Normandy with General Lafont, Chief Scout of France. Continued through Alsace and Lorraine, and on VE Day crossed into Switzerland, Italy, Luxembourg, Belgium, England, Sweden, Denmark, Norway and Switzerland.

1949 - Age 60
Returns to Paxtu for solitary Christmas
Peter and family return to England to live
Visits to Malta, Italy, Greece and France
From Olave's diary (as noted in welcome booklet, visit to Australia 1958)
Visited Holland, Sweden, Norway, Switzerland, Belgium, France and Denmark and many parts of the British Isles; in a five months' tour of Africa travelled over 23,000 miles by air and visited 20 territories.

1950
World Song adopted at World conference in England
The Mayor of Poole, UK, presenting Olave the Freedom of The City in recognition of her service in the cause of youth

1957
50th Anniversary of Brownsea Camp - worldwide celebrations
Olave presides at opening of Our Cabana, the Third World Centre
Olave visits Ghana, Sri Lanka, Australia
While staying with friends in Australia, Olave, who says "I am never ill", found herself in hospital. She suffered with gall stones. But, she was a hardy woman and attended the planned Rally 18 day later

1959 - Age 70
Olave tours South America
Receives 'Freedom' of the Cities of Panama and Reno!
Opens Our Cabana
In a celebration on 17 October 1959 the Foundation Stone for Baden-Powell House was laid by the World Chief Guide Olave, Lady Baden-Powell

1967
Olave tours Australia
Olave had received £300.00 from the Australian 'Ice-Cream for the Chief' fund. It had been given to her to do something for herself. Olave was such an unselfish woman. She had many thoughts on treats for herself but chose to spend the money on books. She had been in South Africa and saw the lack of books and illiteracy so when arriving in Mexico, she rushed from shop to shop and delighted in buying £300.00 worth of books. Her words - "Blew the $300.00 - it was the greatest fun". These became to be known as the 'ice-cream books'

1977
19 June Death of Olave Baden-Powell,  aged 88  in Birtley House
9 August Olave's ashes placed beside BP's at Paxtu in Kenya
Donations made in Olave's name were assigned to the building of the Olave Centre, in London