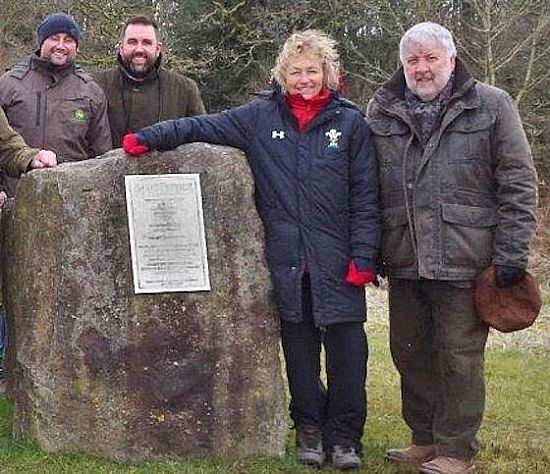 See our front page to see who else was at Banwen to remember St. Patrick.

Information on the Banwen connection with St Patrick is mentioned on Wikipedia:

"The name Banwen clearly derives from the elements Ban and Wen meaning "height" or "summit" and "blessed" or "white" respectively. The name occurs frequently throughout the area. (as the name of a class of fields in Brynlloi, an open common Brynamman and a farm Cwmgrenig) suggesting an ancient continuity.

The village is notable for the local tradition that it was the birthplace of Saint Patrick. This is supported by the writings most widely attributed to him, The Confession of St, Patrick, in which the saint gives his birthplace as Banavem Taburniae or Banna Venta Berniae on the west coast of Britain. Both names are possible Latin cognates for the Celtic name Banwen."

Perhaps one of our local historians may have more information on this.

Was St Patrick, patron saint of Ireland, a Welshman?

As people across the world prepare to celebrate the life of one of the world's most famous Irishmen, was St Patrick actually Welsh?

For many, St Patrick's Day commemorations will centre around pub crawls and street parades, but in one small village in west Wales a more sedate celebration will be taking place.

Patrick, or Padrig in Welsh, was born around 387 AD and was known as Maewyn (Welsh for devoted friend) Succat (a Pagan term for warlike).

He is believed to have come from Bannavem Taburniae, which could be Banwen in Neath Port Talbot, where every year a service is held in his honour.

The annual event sees a small collection of residents, historians and school children congregate beside a plaque left in memory of the patron saint of Ireland, before they retire to a community centre for a cup of tea.