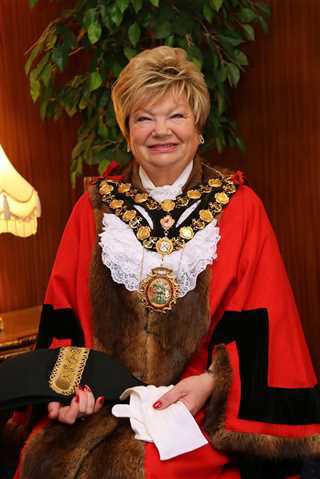 Jason Reynolds of Neath Heritage Scene has just reported the sudden death of Cllr Janice Dudley, the Mayor of Neath Port Talbot.   Jason says he picked up the news from Facebook with Bethan Jenkins AM saying how shocked she is at the news, which has yet to filter through to the media form official sources.

"The mayor of Neath Port Talbot has died suddenly after becoming ill at a public event.

Councillor Janice Dudley was guest of honour at the Round the Pier Swim, at Aberavon Beach on Saturday.

The local politician was in attendance to officially start the race.

But according to event organiser Bernard Donovan she was unable to carry out her role.

Mr Donovan said: “The mayor was taken ill, she suffers from asthma and had a very bad asthma attack and had to be taken into A&E but the race went ahead.”

On Sunday night it emerged that Mrs Dudley has subsequently passed away, leading to tributes from local politicians."

The Ediorial team of this website send their condolences to her nearest and dearest.