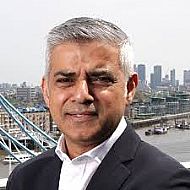 A reader expresses the view that a Mayor of a community should be a leader and have the power to improve his/her domain.

The reader compares Mayors and their roles and questions why the Mayor of Neath Port Talbot is not given the space deserved on the council's website.

Pictured above is Sadiq Khan, the Mayor of London, who is always in the news and Janice Dudley, the Mayor of Neath Port Talbot, who we rarely hear about in local news matters.

"The Mayor of London, as well as other Mayoralties across the country that have actual power are directly elected by the community they serve.

The Mayor of Neath Port Talbot is a figure head, a ceremonial position that is given to councillors for one year on the basis of seniority. If you want to give the Mayor more powers, then we would probably have to move to a directly elected mayoral system."

Clearly the above comments are food for thought.