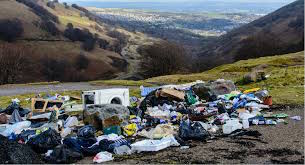 It would be more cost effective to do away with these charges to avoid fly tipping which is getting worse week by week.

In the end it would result in no loss of revenue by councils.

If councils want extra revenue then on-street parking charges should apply to those who have garages and drives and do not use them.   This would mean streets being a lot safer - especially for young children.

REPORT fly tipping  You can do this on-line - see the link below:

BEWARE of those who offer you to clear your rubbish at a charge.   Some avoid the official tip and fly tip the load.