Neath Town Council - a councillor with a difference

Neath Town Council have been complimented on their open and transparent website which shows the photographs and home addresses of all members, that is, except one: 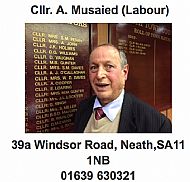 Clr A Musaled gives his address as 39A Windsor Road, Neath, which is the flat above the Neath Labour Party Office and that of Neath's MP., Christina Rees.   This is also the address for Eurotrade Universal Ltd.

In the declaration of interests, Cllr Musaled declares that he is director of Eurotrade Universal Ltd., who are agents involved in the sale of machinery, industrial equipment, ships and aircraft to countries including: Iraq and Iran.

Another director of this firm (listed as having 3 executives, including the company secretary) is someone with the same name who allegedly lives in the Midlands

Details of Eurotrade Universal Ltd can be seen on the Internet where Cllr Musaled's address on one website is given as Dyffryn Road, Alltwen.