+ +  Reader reports on APPLE IPHONE 6 scam and the fact that the BBC have NOT reported it - despite their news logo being used!

"I write to warn others about a cleverly worded scam that 'popped up' on my iPad - what is more, it appeared as a BBC NEWS ITEM - even the url at the top of the page looked genuine!
The text mentioned a promotional scheme by Apple in view of their sales dropping behind the sales of the Samsung Galaxy 6 (a valid statement). The deceiving part was the BBC News heading, which could fool anyone.
Resulting from this, I did a search on a valid BBC News site and found nothing. What surprises me is that the BBC, including their website, has NOT mentioned this scam.
Today (21.8.15) my wife mentioned seeing an item on the ITV 'This Morning' programme.
No doubt more will be heard about this - but the media is very slow in reporting it - including the BBC whose news heading was used."

+ Follow-up   The NF research team have this day looked at http://www.newsoggle.com - the one stop website on what the papers say, and can find no mention of this scam.  Is it because it is linked with an alleged advertising website - or perhaps there's some connection with Apple not to degrade their product?   Remember that Apple has been reported as one of the richest companies in the world   We must wait and see what develops - in the meantime we are pleased that we seem to be the first with the news.

The following report appeared in the Daily Express on the 16th July.   It therefore makes us wonder even more about why the BBC News scam has not been reported! 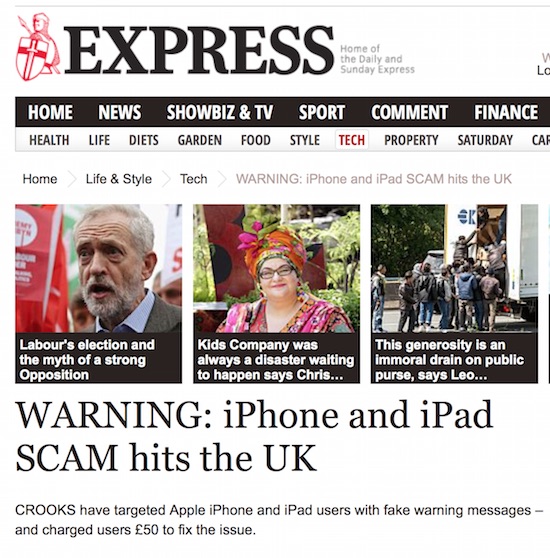