An offer that Cllr David Lewis is likely to refuse +++

Cllr David Lewis knocks this website, the editorial team and refers to some readers as being in 'cranks corner'.    Like all other readers, David Lewis has the right to express himself.   It is likely that he would like to be banned from this website - that would, in his mind, endorse his views and give him some satisfaction.

With his latest 'lengthy' post in the menu we are going a step further and offer David Lewis a regular blog page of his own.   This will give him the opportunity to respond to some of the issues raised by readers on this website - and perhaps offer some constructive solutions to existing problems.

Cllr Lewis could very well surprise everyone with some constructive comments and be a shining light.   We must wait and see!

+ The offer to David Lewis to join Just Stan and Frank Little as a blog in our menu has been turn down with a 'no thanks' see our letters page.  The editorial team have no crystal ball but the reply was as expected - hence our headlne: 'An offer likely to be rejected'.

It was an opportunity where David Lewis could prove us wrong and go that one mile further and express himself in his own way on a level playing field.

Now his future comments will be subject to the space contraits on our letters page.  We have no wish to cramp his 'style' but in the end he must be treated like any other reader - in fairness to them.

++ And now an editorial apology 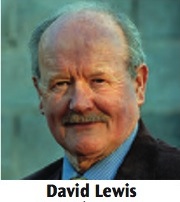 We have to apologise to David Lewis for inferring that he is a Labour party councillor and for publishing the photograph from the NPT Council's website, which still shows him as a Labour member.  David Lewis has corrected us and writes on Readers' Letters:  "I am no longer a member of the Labour Party. Last year I was sacked from the NPT Cabinet   and in the autumn I was thrown out of the party. Probably for ‘insubordination’ linked too the sacking of the Education Minister, Leighton Andrews. (Welsh Assembly Web Site for details)."

David Lewis adds that any of his views expressed on this website are his own and are not those of him in an official capacity.

Note that we have now published a photograph of him without reference to the Labour party.

The saga continues on our Readers' Letters page.