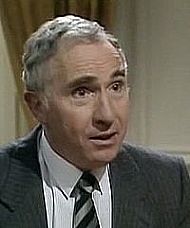 In the TV comedy series 'Yes Minister' the part of Sir Humphrey Appleby was played by actor Nigel Hawthorne (left).   At 10 Downing Street today the power is in the hands of Sir Jeremy Heywood (right) who was part of the 'inner circle' that took Britain to war with Iraq under the Blair government.

Sir Jeremy Heywood, private secretary to Tony Blair at the time, now does not want the content of messages between Bush and Blair revealed to the public.   We wonder why?