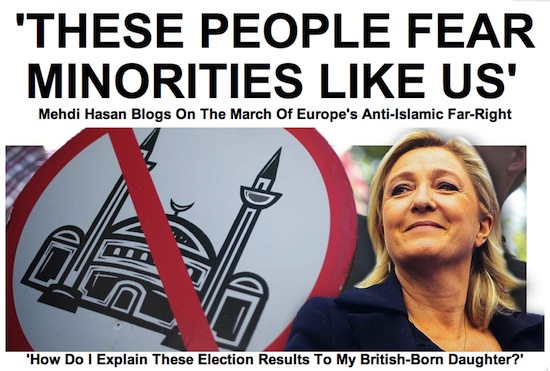 In 2006, at the height of the hysteria over the face veil, the Guardian's Jonathan Freedland imagined what it must be like to be a Muslim in Britain. "I wouldn't just feel frightened," he wrote. "I would be looking for my passport."

On Sunday, as the European election results began to flood in, with far-right parties on the march from Scandinavia to the Club Med, I joked with my (American) wife that we might have to start packing our bags and head across the pond.

Hundreds of column inches have been devoted to explaining how austerity economics, democratic deficits and mass immigration have helped bolster the continent's far-right fanatics and neo-Nazi nutters. Our politicians and pundits have been less keen, however, to discuss the Islam-sized elephant in the room: what unites Europe's far-right parties perhaps more than any other issue is their fear and loathing of people such as my wife and me.

Take the Front National, which won the European elections in France. Its leader, Marine Le Pen, bangs on about the "progressive Islamisation" of her country and compares Muslims praying in public to the Nazi occupation of France. Consider also the Danish People's Party, which topped the polls in Denmark. Its founder Pia Kjærsgaard refers to Islam as a "political movement" and claims that the Quran teaches Muslims "to lie and deceive, cheat and swindle".

How about the Finns Party, which doubled the number of its MEPs? The senior MEP, Jussi Halla-aho, has accused Islam of "sanctifying paedophilia" and a Finns councillor called Amon Rautiainen has called for  Muslims to be "boiled alive". In neighbouring Sweden, the populist Swedish Democrats gained their first two MEPs. The party's leader, Jimmie Åkesson, once referred to Muslims in Sweden as "the biggest foreign threat since World War II".

Who is Mehdi Hasan ?

Mehdi Hasan (born 1979) is a British political journalist, broadcaster, author and is an Islam

As a journalist and author, Hasan is the co-author of a biography of Ed Miliband and the political editor of the UK version of The Huffington Post. From a British Indian background, he is the presenter of Al Jazeera English showsThe Café and Head to Head.[5]

Let's get down to facts.   What did Enoch Powell really say in his "Rivers of Blood" speech in 1968 that upset so many people at the time?  Is there a comparison with what is happening today?   Will his words come back to haunt us?  http://en.wikipedia.org/wiki/Rivers_of_Blood_speech

Should we reflect back and be wiser - or should we supress our feelings and brush them under the carpet?  A fair and broad look at this country is what we want in order to get to grip with reality to and know where we are going.    What would Enoch Powell say if he were alive today?