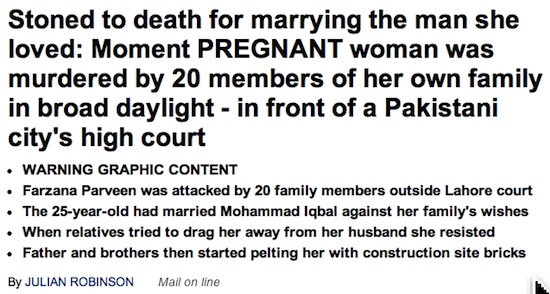 The word that dare not be spoken

You have to admit it - this website DOES go that one mile further.

Often the killers are allowed to walk free because Pakistan's Islamic-tinged legal system includes concepts that give the right of forgiveness to close relations of murder victims.

Tahira Abdullah, a human rights activist, said it was vital the country follow the civil code rather than sharia law.

"This woman was pregnant so it is a double murder and these murderers must be prosecuted under the criminal laws of Pakistan," she said.

"We are now at a crossroads where we have to decide whether we continue going down the Talibanisation route or whether we go down the rule-of-law route."