I have looked forward to the new exit being done at Neath Railway Station so that I do not have to climb those horrendous steps or cross the railway line in the company of a railway employee who has to unlock the gates.

I had read the following in the SWEP and had hope :-

“There will also be a disability access point to platform 2, including a new platform building that will allow passengers to get between the station and car park without having to use the council-owned or station footbridge.

There will also be new ticket gates and a ticket vending machine within the new platform 2 building.

Mr Hain had criticised the condition of the station, describing it as a terrible first impression for visitors to the town.”

Mr Hain said: "This work is welcome news to all Neath train users.

"Disabled users coming from the Cardiff direction will now no longer have to wait to cross the track but will be able to access the westbound platform directly.” 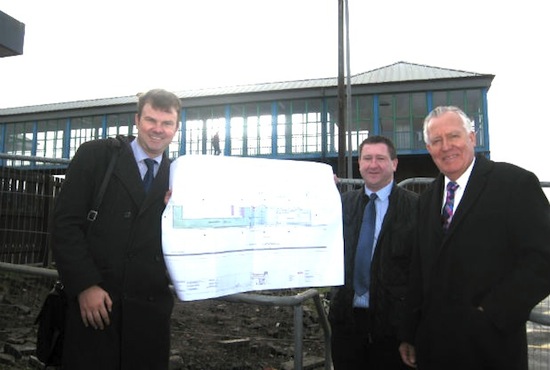 The first time I used the new exit and went down the ramp, when I reached the lift it would not work. It was at this point that I was informed by the Railway Staff present that the lift was nothing to do with the Railway, all they had done is provided the new access via a ramp. The owner of the footbridge and lift was Neath Port Talbot County Borough Council. So as the Railway does not own the bridge or lift it is not their worry if it is working or no. I was told if you want to complain do so to the Council, now you will have to climb back up the ramp and exit via the steps or cross the line when a train is not coming.  Neither of these options is good for me as a disabled person who struggles to get from A to B with the least fuss possible.

On Wednesday 30th April 2024 (this week) I again arrived at Neath Station and this time I approached the new gate facility and enquired of the staff before going out of the station and down the ramp if the lift was working. I was told it was in operation. I entered the lift which was smeared in chewing gum and filth and stunk like a public urinal but it worked. The doors opened and I was confronted by a tramp standing up sleeping. I walked past him and along the bridge and into the down lift. I pressed the button and the lift moved. It smelled the same as the other lift, but at least it worked and I tried to hold my breath. Well, I had to give up holding my breath as half way down the shaft the lift stopped. I pressed the button, nothing, the lift would not go up or down.

Ten minutes later after pressing the alarm button numerous times no one had contacted me. I tried to ring my brother who lives in Neath on my mobile but could not get through as inside the lift there was not much signal. I then tried ringing 999 and on my 4th attempt got hold of them. They were brilliant and she said straight away the Fire Service are on their way to you.

Just after this a crackling voice came over the tannoy system saying we know you are in there, we are watching you on CCTV, then the voice was cut off. I pressed the alarm button again and again but as soon as I took my finger off it stopped. There was an automated voice telling me to ring the emergency number on the keypad but there is no keypad. The voice of a man came back on and said do not panic and that was it. The Fire Service got there when I had been in the lift for approximately 30 minutes and straight away I had contact with a person as one of them shouted down to me are you ok. He then asked relevant questions such as are you alone, do you have any underlying medical conditions etc etc. I was told I might be in there a little longer as someone was bringing keys from somewhere.

After 40 minutes of being in the lift I was told to hold on tight as they were going to lower the lift manually, which I believe they did. I jerked to a halt and the doors opened. Some workmen who had been working on the station were in front of me. I was afraid to step out of the lift in case it jerked again but did manage to get out eventually when one of the workmen said go on get out.

A young fireman who I thanked profusely asked me my name and age for his book and I was told, there you are, on your way, you can go now.

I was not asked if I was ok, if I needed a seat or offered even a cup of tea. I was shaking like a leaf and managed to get across the station car park and into the post office where I eventually stopped shaking.

No one even wanted to know who I was. The Railway staff will have nothing to do with the lift as it is Council property and apparently the Council had sent for an engineer who was on his way with keys. They did not tell me this and I feel I was kept literally in the dark until the Fire Service arrived and straight away made contact with me and reassured me.

I was in that lift for 40 minutes and no one from the Council had turned up to see if I was ok. I was afraid, I cried, I was mad and I felt abandoned. The Fire Service came to my rescue and the impression I got on speaking to an employee of NPTCBC later that day was that I should not have contacted the Fire Service but waited for an engineer to come and get me out.

I asked the NPT CBC Council employee, who did not even ask me my name, why the keys they spoke of were not kept at the station and he told me that there is no facility to keep the keys there and that the lift actually just happens to go from car park to car park and is nothing to do with the Railway. So is this the new disabled access or isn’t it?

I asked where the keys are kept, how far from the station and was told I could not have that information. I asked how long would I have been in there if I had not alerted the Fire Service and I was again told, I cannot tell you that.

I will never go into that lift again which means that disabled access as far as I am concerned is still unavailable at Neath Station.

I was offered an address if I should wish to complain. I can write a letter which will be filed and the situation will continue.

No one was there to ask me if I was late, if I was ok to carry on my journey or even to offer me someone sympathetic to talk to. Is this what The Department of Transport thinks is acceptable? Is this acceptable to Arriva Trains? Is this acceptable to Peter Hain MP? Whatever money has been spent at Neath Railway Station has improved nothing for me, a disabled person and the care received from the owners of a filthy lift which should be in a far better state than it is was abysmal.   I was told I was being watched on CCTV but there was no one there to get me out, there was no one there after 45 minutes to check if I was OK. In fact there was no one from the Railway or the Council present when I left that lift on my shaky legs and half stumbled across the Railway car park.

Readers are invited to comment on our READERS' LETTERS page