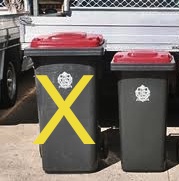 I know that opposition politicians are always putting in FOI requests and demanding explanations for trifling amounts of expenditure but even I was taken aback by this latest example from Labour-led Neath Port Talbot Council.

They have adopted a plan to swap all the household wheelie bins in their area for smaller ones in the hope of reducing the amount of waste going to landfill. The Council report recommending the switch reveals that the total cost will be £730,000. It suggests that this will encourage local residents to recycle and compost more.

This scheme is barmy, a complete waste of £730,000 of the public’s money, and comes at a time when the council is planning to cut a host of other important services which will impact upon local communities.

If the council go through with this, over 45,000 households will lose their large 240 litre bin, and see it replaced with one which is over 40% smaller at 140 litres. All that will happen is more fly-tipping, and litter which the council will have to spend money clearing up.

Nobody is arguing about the need to put up recycling, but Neath Port Talbot’s approach is all compulsion, and no carrot. I am sure that they could spend this money in a different way to achieve their objective.

What is worse is that Labour are spending this £730,000 on replacing wheelie-bins at a time when they are planning deep cuts that will affect the lives of local people and levying a council tax that is higher than that in neighbouring Welsh authorities, the second highest in Wales in fact.

For instance, this amount of money could mean no cuts for early years development, and subsidised bus routes; no cuts for community meals, and no need to slap charges on those residents using the council’s day services. It could also mean no cut in the amount spent on gully cleaning and land drainage which given the amount of rain we have had would seem to make good sense.

From the Council that had a waste incinerator built that was rarely used and which has now been mothballed this is another example of an idea that should never have left the drawing board.
# posted by Peter Black AM