A look at Mandela Way

Reading the article in the evening post recently I thought it was 1st April at the time when I read that the council were discussing naming the southern link road into Neath the “Nelson Mandela Way”, I have never heard such a idiotic suggestion in my life, once again the council has not failed the town in making the wrong decisions, whilst having nothing against the great man what on earth has he got in connection with Neath.

One wonders who came up with this ludicrous idea, would it have originated from our MP Mr Peter Hain, who continually makes great efforts to remind us of what good friends he was with Mr Mandela, do doubt to promote the sales of his books?

If the road is to be named then why not name it in recognition of someone born in Neath. One person who immediately comes to mind is William Squires (left) who was born in Florence street, which is the street adjacent to the link road. He was born in Florence street on 29th April 1916;  as a matter of fact his sister is still living in the house he was born in. Wouldn’t it be wonderful to name the road “William Squires Way” and invite his sister along to the opening; I am sure she would be very proud.

William Squires was a brilliant Shakespearean actor. He was also a great film actor appearing in films such as Lord of the Rings, Battle of the River Plate, Where Eagles Dare, Bond films, he also appeared in many TV shows, he was a friend of Richard Burton and acted alongside him a number of times, appearing as Sir Thomas More opposite Burton who played Henry V111 in “Anne of the Thousand Days. He appeared in Camelot and there is even a memorial bench at Hampstead Heath in London dedicated to him. Surely his town should honour and  recognise his work as one of the best actors this country has produced; William Squires died in1989.

Neath council has me worried, are we going to end up like the TV show “Fools and Horses” with the new shopping complex named “The Nelson Mandela” complex? Who ever thought of this idea obviously has very little knowledge of Neath’s history.

Once again people like Peter Hain and certain councillors, not being natives of the town, do not have a clue as to the history and great people who were born here - some are pictured below:- 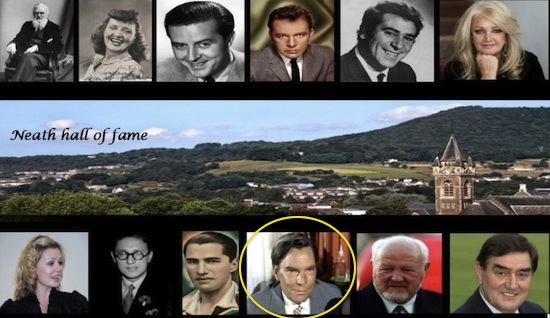 One of several websites being developed by GWR - Guardian Website Resouces.  No wonder there are rumours of a take over by a famous media organisation.    How many Neath personalities do you recognise in the above screen shot?

Garden of statues  How about Neath PT council going that one mile further and making Victoria Gardens a garden of statues - the Madame Tussauds of Wales?   What a wonderful tourist attraction this would be.

Each statue could be sponsored by a brand name - thus making the venture very cost effective.   The brand names could mention their sponsored statue on their television advertising - thus giving Victoria Gardens free publicity.