Peter Hain MP gets a belated 'Brownie' point from reader.

The watchful eye of a reader (Letters Page) has noted that the MP for Neath has at last signed his support for the motion relating to the miners' strike in the 1980's when it is alleged that the then Thatcher government made statements that were untrue in an effort to influence the media and therefore the public at the time.   This information has come to light after documents have been made public following the thirty year rule, during which time they remained classified. 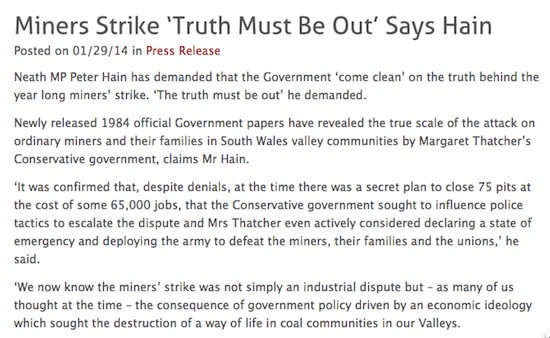 Ed Note ..... Our weekend feature 'Just STaN' broke the news about the motion last week revealing the mining constituency MP's who had not signed at that time.

Another scoop by STaN has been promised for next weekend.