We know that this is a nationwide problem, but the fact is that it is visible in some towns more than others.   We have to ask WHY?    Do some towns have more responsible citizens - or do some towns have better control over cleaning up the inconsiderate and thoughtless actions of others?   In some countries you see none at all.   We think that it could be a combination of education and discipline.

Traffic wardens should be made street wardens - they would probably collect more for the council from litter bugs than the motorist, certainly an attractive thought for a council who needs the money.

Here are some facts we found on the Internet relating to the chewing gum problem: 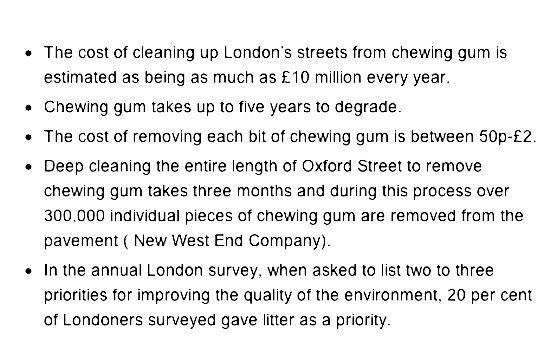 We know, without a doubt, that if a survey were done here in Neath for improving the town the citizens would give litter as a priority.