The road markings on Pen-y-wern Hill with the unsignposted junction to Llygad-yr-haul, which is also badly lit at night, present a MAJOR ROAD HAZARD.

The non-existent road markings make it difficult for vehicles turning right into Llygad-yr-haul from the Pontardawe direction.

In fact we can report that several accidents have nearly happened at this spot.

The powers that be, and the relevant councillors, are urged to take action on this as soon as possible. 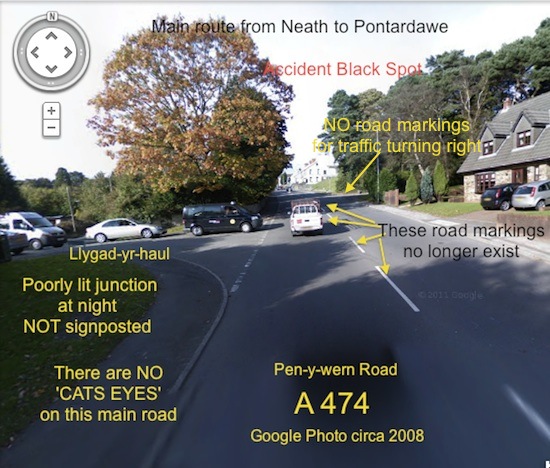 One reader states that, in his opinion, this situation amounts to council negligence and that in any possible court case they would be considered to be at fault.   Road markings are required as soon as possible with lighting and signposting later.

"We are responsible for maintaining existing road markings, including yellow lines, centre lines, broken lines at junctions, road speed restriction markings and any other road lining/markings which require refreshing and repainting. An approved contractor undertakes this work as directed by the Authority."