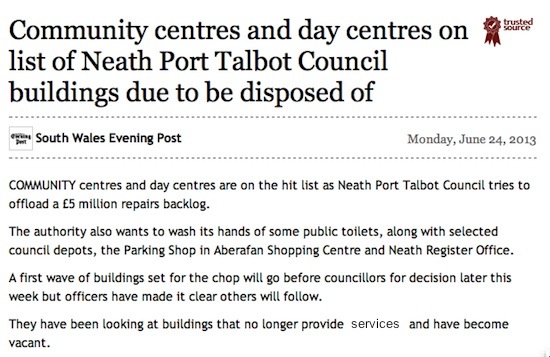 Concern is expressed on our READERS LETTERS page about the above report.

Gone are the council houses, the so called building stock, and now it appears that our heritage buildings are under threat.   A reader asks:   "What will the council have left to manage?"    Selling off the council's assets, the family silver, so to speak, may not be a wise move and something the council will later regret.

Heritage Scene - Neath, have long said the the future of the town lies in its heritage.   Neath has a history like few other towns and can be the makings of the future.   With the right approach the heritage of Neath can draw visitors into the town and benefit local traders.  Now is the time to think seriously about this for the sake of our future generations.

Heritage Scene - Neath, relates to a group of enthusiasts, including local historians, who have got together to promote the heritage of Neath.   The 'scene' was only formed last year so it is early days in their development.   The long term aim is to generate capital for a heritage centre that would benefit the town and its economy.   Much will depend on support from the council who would ultimately benefit from their efforts.   The constitution of the group clearly states that is a not for profit concern and that their aim is to benefit Neath and make it a town for the future.

Hertitage Scene - Neath, sincerely hope that the people of Neath and surrounding areas will give full support to its aims and objectives for the future.