Surprise, surprise two new faces on the streets of Neath.   Can you guess who they are? 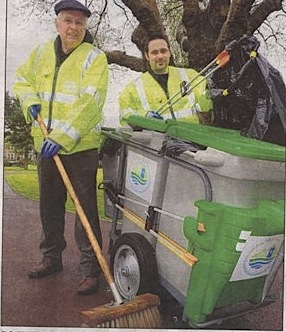 We are just wondering if the following letter from our Readers Letters page has a bearing on this.

" ..... where is it going to end, dead trees, gum, litter, weeds every where, rubbish building up because of fortnightly collections. A friend of mine came over from France to visit, and she noticed all the above, and said how Neath and the surrounding areas look in a mess, the council needs to get a grip before its too late.....'

Who will be the first reader to name the new bin men?

FOLLOW UP.....   17.5.13
Pictured above are Councillors Peter Rees and Andrew Jenkins attempting to set an example to some of our readers  - according to the local newspaper who were afraid to mention the name of this website.   One of our readers suggests they were actually showing up two councillors whose ward in which they were appearing - just as a newspaper photographer was passing!
In fairness, a word of praise has been given by a reader who was challenged to do the same thing.  Perhaps this is the start of a new service for the town centre?  It certainly shows that some councillors do listen to comments on this website - and they must be complemented at least for that.

See our Readers Letters page for the comments made.