Heritage Scene can save Neath 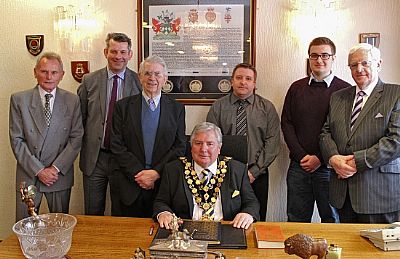 The Heritage Scene-Neath firmly believe that the town's great heritage, going back to Roman and Norman times, can put Neath on the map as never done before.

The Heritage team met the Mayor of Neath, Cllr Martyn Peters, and the council's Labour Leader, Cllr Ali Thomas, together with Steven Phillips Chief Executive, at the Mayor's Parlour on 29th April 2013, to present them with the first 'Audio Memory' DVD produced in conjunction with Buffoon Media.

Recording memories of those in their golden years is very innovative because it can be a lasting record for future generations.   This is all part of the plan to highlight Neath as never done before.

The main aim of the group is to have a heritage centre in Neath, cafe included, where Neath's art treasures can be seen.   These treasures are current locked away out of sight at an undisclosed location.

The Heritage Scene-Neath are grateful for the council's interest and enthusiasm and believe that by working in harmony they can make Neath an outstanding town that will attract thousands of visitors in the future.

Full details of the meeting are given in the Neath Guardian website:
www.neathguardian.co.uk

More about the Heritage Scene-Neath can be seen on their website:-
www.heritagescene.co.uk