Are we making the most of our Mayor?

It is something we have mentioned before and feel must mention again - and that is the lack of engagements arranged for our Mayor.

Cllr Mayor Martyn Peters has only one official engagement next week as you will see from the official list below.

The Mayor is the official ambassador of our town and we feel he is not being used to advantage - especially by the business sector here in Neath.   A tour of the Neath Abbey business park and a chat with some of the workers is just one example of what could be done.

Recognition of the business sector in this way would surely create a 'feel good' factor and make the general public aware of what is going on at Neath Abbey.

During a Mayor's term of office party political issues are not considered - he just represents the town as an official figure.

If the Evening Post is not prepared to cover the event with a photographer then we  feel sure that the Neath Guardian website would do it.

It is about time the council gave credit to the business people who generate jobs and help the town's economy - and using the Mayor could be one way of doing it.

The Mayor's engagements can always be seen on the Neath Guardian website - below is the list for the forthcoming week:- 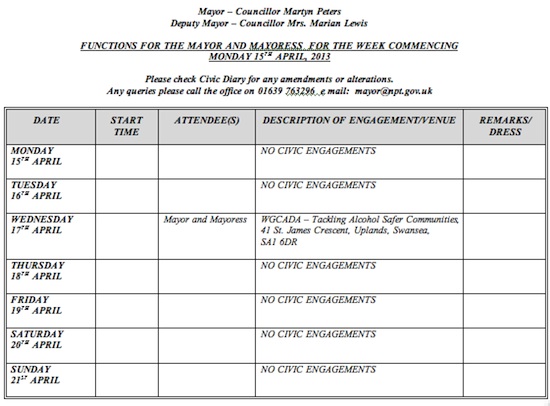 Mayor Cllr Martyn Peters said that the above report does not reflect the fact that around 25% of his engagements are arranged at short notice and are not listed on the official engagment list.   Last February, as an example, visits were made to several retirement homes and a unit at Neath Abbey employing disabled people.