A notice to note

It reminds us: Where is King Arthur buried? 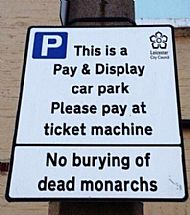 Following yesterday's news about finding the remains of King Richard III  a reader has sent us this notice he came accross this morning.

No doubt it will also appear elsewhere in the media.

Needless to say, our reader is a Neath exile and now lives in Leicester.   He is aware of the pending car parking changes in Neath.

A BBC report yesterday stated:
A skeleton found beneath a Leicester car park has been confirmed as that of English king Richard III.

Experts from the University of Leicester said DNA from the bones matched that of descendants of the monarch's family.

Lead archaeologist Richard Buckley, from the University of Leicester, told a press conference to applause: "Beyond reasonable doubt it's Richard."

Richard, killed in battle in 1485, will be reinterred in Leicester Cathedral.

Here in Neath we can reveal that two of our researchers are working to find the burial place of KING ARTHUR, which is thought to be in the Vale of Neath.   Much evidence has already come to light and finding the remains of King Richard III is sure to revive interest.

A twist to the story

It must have been the Welsh who buried King Richard III in the car park in Leicester.

How do we know?

Because the English buried Prince Llewelyn in the GreyFriars graveyard in Cardiff and then built the Hilton Hotel on top of him.

Llewelyn Bren, Lord of Senghennydd & Miskin was killed by the Despensers,  favourites of King  Edward II, in 1317. He was hung drawn and quartered outside Cardiff Castle and his remains are today underneath the Hilton Hotel in Cardiff.