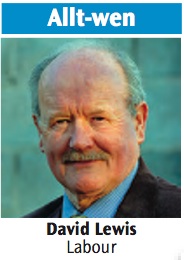 In a vitriolic letter to this website, Cllr David Lewis expresses his views on certain writers who have responded to his explanations on pensions for councillors.

Cllr Lewis writes: "My not providing answers to the follow up questions from correspondents had produced both editorial comment and the  kind of offensive comments laced with bigotry that are a fundamental weakness of this site.

I have neither the time nor desire to sit in front of a computer 24/7  supplying data to a group of people who inevitably twist that information against NPTCBC."

Cllr Lewis has the right to express his views and will be given unbiased coverage despite his unwarranted remarks against the editorial team.   The diplomacy of this councllor must be compared with other councillors who have benefitted this website.