Facts that councillors should have looked into.   Here are photos the NTP planners don't want you to see.

Were councillors mislead - or did they know?

It has been alleged that it was said by the authorities that Neath Empire had no space for car parking and was a major factor in the decision to demolish it.   This is rubbish as we have found out.

Thanks to Google satellite we can show you the facts:- 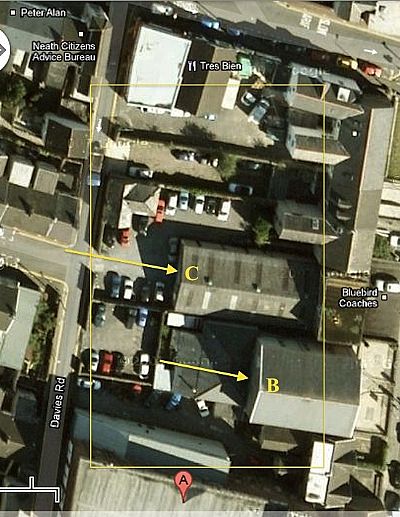 The building marked 'C' has now been acquired for a gymnasium (see below), which the owner said could have gone into the Empire along with other facilities run by others.

The point we are making is that most of the area within the rectangle could have been a made into a car parking area with negotiations and careful planning by the NPT authorities.   As it is, an asset to Neath is being demolished - and our councillors let it happen.    It is clearly a lack of foresight and bad planning.

By the way, don't let anyone tell you the Empire was in a bad state of repair - we have photos to prove otherwise.

Here's more photos to show you what we found:-

On the left is the empty building (C), which could have been used for a car park area.  On the right you can see the inside  - it's going to be a gym - which could have gone inside the Empire, along with several other users.  Note the Empire being demolished in the background.

It should be remembered that NPT CBC bought the freehold of the Plaza Port Talbot - they seem to be dragging their feet over that, but at least they have the power to do something positive - unlike the Empire Neath.