Councillor threatens to chain himself/ herself to Empire Column?

A rumour is circulating that a councillor has threatened to chain himself/herself to one of the columns outside the main entrance of the Neath Empire building that is due for demolition. 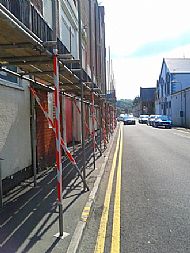 Comments on the grapevine say that this is the only way that attention can be drawn to the loss of the building and getting attention of the TV media.

We are aware that a supporter has offered to buy some chain from B&Q but may wait until Wednesday when senior citizens get 10% off their purchase.

Are we joking?  Just look at the Facebook website and see the comments left by a group of over 600 people who are taking this matter very seriously indeed.

It was not until the scaffolding went up this week that many residents became aware of what was happening.   It is alleged that local drama groups and operatic societies were not made aware of the pending demolition until it was too late to do anything about it.

Above right is a photograph sent in by a reader.   It shows scaffolding in position ready for the next stage in the demolition process.